One of the wargamey boardgames I recently played is Star Wars: Rebellion (2016).  It's brand new and Wayne brought it to A Gathering of Gamers at the Pizza Ranch in Elkhorn, WI, on a third Sunday.  Bruce and I gave it a go while Wayne officiated.  It was still a little rocky as Wayne had only just gotten the beast but we jumped in fairly quickly and played a full game through the afternoon.  It's a beautiful game with lots of bells and whistle to make it an excellent value. 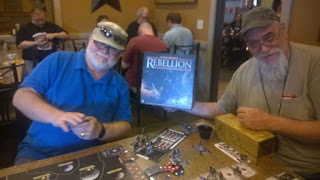 Star Wars: Rebellion is a board game of epic conflict between the Galactic Empire and Rebel Alliance for two to four players!

Experience the Galactic Civil War like never before. In Rebellion, you control the entire Galactic Empire or the fledgling Rebel Alliance. You must command starships, account for troop movements, and rally systems to your cause. Given the differences between the Empire and Rebel Alliance, each side has different win conditions, and you'll need to adjust your play style depending on who you represent:

As the Imperial player, you can command legions of Stormtroopers, swarms of TIEs, Star Destroyers, and even the Death Star. You rule the galaxy by fear, relying on the power of your massive military to enforce your will. To win the game, you need to snuff out the budding Rebel Alliance by finding its base and obliterating it. Along the way, you can subjugate worlds or even destroy them.

As the Rebel player, you can command dozens of troopers, T-47 airspeeders, Corellian corvettes, and fighter squadrons. However, these forces are no match for the Imperial military. In terms of raw strength, you'll find yourself clearly overmatched from the very outset, so you'll need to rally the planets to join your cause and execute targeted military strikes to sabotage Imperial build yards and steal valuable intelligence. To win the Galactic Civil War, you'll need to sway the galaxy's citizens to your cause. If you survive long enough and strengthen your reputation, you inspire the galaxy to a full-scale revolt, and you win.

Featuring more than 150 plastic miniatures and two game boards that account for thirty-two of the Star Wars galaxy's most notable systems, Rebellion features a scope that is as large and sweeping as any Star Wars game before it.

Yet for all its grandiosity, Rebellion remains intensely personal, cinematic, and heroic. As much as your success depends upon the strength of your starships, vehicles, and troops, it depends upon the individual efforts of such notable characters as Leia Organa, Mon Mothma, Grand Moff Tarkin, and Emperor Palpatine. As civil war spreads throughout the galaxy, these leaders are invaluable to your efforts, and the secret missions they attempt will evoke many of the most inspiring moments from the classic trilogy. You might send Luke Skywalker to receive Jedi training on Dagobah or have Darth Vader spring a trap that freezes Han Solo in carbonite! 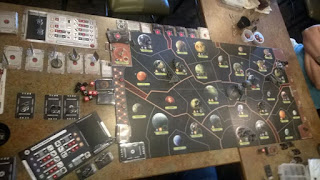 I decided to do the opposite of what I normally do in wargamey boardgames and try to play this less like a wargame than one would assume necessary.  This resulted within a couple of turns in a deficit of military units that would never be possible to overcome.  Mind you, this was a strategy I tried with the Rebels and would never attempt this with the Alliance.  The Alliance needs military units in abundance to search for the Rebel base in addition to prosecuting war.  In any event, I didn't allow that deficit to influence Rebel strategy.  I'm not sure it is possible to win this way but in the final turn when the Rebel base was captured, the Rebels had lined up four Objective Card points worth of Missions for Rebel Leaders to perform that would have meant a Rebel victory.  I say I am not sure because there were a couple of missteps for the Alliance regarding Alliance Leaders locking down systems when used to react to Rebel Leader missions.  Now that I've seen the cards, I would say that a non-wargaming strategy might still work but not if taken from the outset.  I think the Rebels need to hold their own militarily though the first third of the game and could turn fully to non-wargaming strategies in the second and third phase.  Plus, I would avoid placing the base on a Populace World even if remote relative to starting positions.  Pick a random non-Populace planet a bit out of the way and do nothing to support it or draw attention to it. 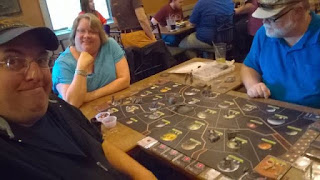