We had another chance to play Le Havre (2008) last week and so we did, once again.  Always a treat to play this game as it continues to be challenging as an individual and as a competitor among other players.  It's not often we get a full five players for this game, so we had to squeeze onto two Culver's tables a bit but we were all game to do so. 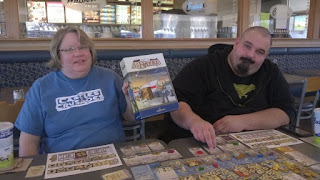 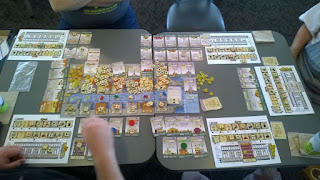 I'd almost forgotten how much easier it is to feed your own populace in a five player game of Le Havre but glancing at the player mats, I noticed that this considerably eased my "No Ships" strategy.  I urge folks to print the player mats up for their own game from the BGG downloads.  They make refreshing oneself to the particulars of the variations for a particular number of players very simple which in turn speeds up the game.  You'll find them in the file section here and named as "Le Havre Player Aids (2 Players)" and so on up to five players.  Despite having some buildings that were very much in demand, I got edged out on this game and probably should have allowed for a bit of debt in favor of exploiting my fishing prowess to amass a larger fortune along the way.  I really must learn that a little debt in Le Havre is not the end of the world. 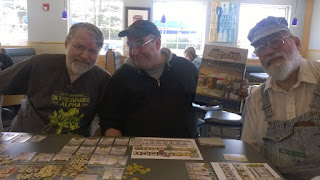