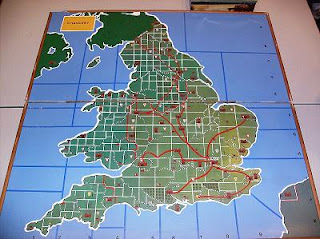 An enlarged Kingmaker game board (4' x 5'?) used at Conception 2009
One of my favorite wargames with a focus on politics is Kingmaker from Avalon Hill (originally from 1974, though I have a 1976 rules printing currently). Even the basic game has enough complexity to warrant a good deal of replayability. For those unfamiliar, this game allows players to recreate or re-envision the political struggles during the time known now as the Wars of the Roses. The designer, Andrew McNeil, writes in his designer's notes, "The start of the game has been fixed at about 1453—the year of crisis in which France was finally lost, Henry VI went mad, and the birth of a son to Margaret shattered Richard's hopes of succeeding to the throne peacefully." Henry VI was a weak individual who became King of England on the death of his father, Henry V, when Henry VI was eight months old. A council of regents governed during Henry's minority and the wrangling that went on between them and between many more throughout the reign of Henry VI and just after, are what fuel this classic game. 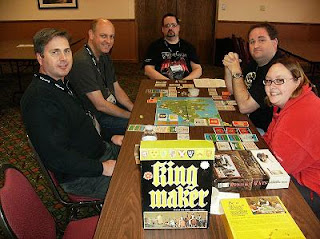 A group of gamers at GaryCon II in one of my events
McNeil points out that for the sake of this game the heirs in both houses count as little more than pawns. Though he acknowledges that there were strong nobles in both lines of succession, some of whom were also quite adept as rulers and/or on the battlefield, this game does not dwell on individuals so much as on what they represent. Even the cards representing the many noble factions who govern the course of each game are meant to be thought of as houses or lines in their own right. They can be eliminated but can return to play, broadly representing how a brother, son or another takes up the mantle of the name of the family. To create more dynamism, McNeil makes some adjustments to what families are involved, their relative strengths, and what titles are firmly held. The event cards which propel gameplay are meant to be taken less than literally. A peasant revolt, for instance, that might draw a noble and office holder back home at a crucial moment might better be viewed generally as one of any number of actual events, a false alarm of an uprising, the rumored machinations of a rival faction, etc. One could quibble over some of the choices made but taken in their entirety they prove to be quite elegant in their delivery of an exciting and unpredictable game. 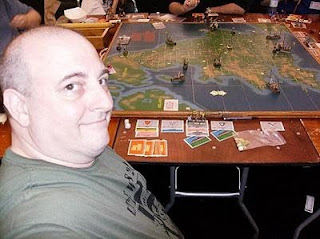 I was able to participate in two sessions of Kingmaker at Little Wars 2010
So why am I posting about this game on this particular section of my "tri-site?" I've made an effort to play this game a great deal over the last year as a way of studying how it works with various types of players with an eye toward transferring some of that same dynamism to MF WARS (Medieval Fantasy Wargame and Roleplaying System).  Now, some of you who are skeptical about how universally enjoyable the political aspects of RPGs could be received, read on a bit further.  There is never anything in gaming, particularly in RPGing, that need be done in a binary fashion, all or nothing, with no sliding scale for deployment of the rules.  Even the staunchest of by-the-book referees would admit that, given that most RPGs stress the ideal of guidelines rather than hard-and-fast rules, at the table things get fudged so no two facilitations of any game are quite the same.  Anyway, with that digression in mind, let's also be clear that most RPGs have some random factors involved, most often dice rolling, and that part of what brings enjoyment is trying to limit the chance of failure through tactics or strategy before the dice ever come into play.  What I have noted that most often hinders enjoyment of political games is the sense that either one or limited political outcomes are truly possible to realize in a game due largely to the limitation of linear thinking on the part of both players and facilitators.  Don't get me wrong, these are imaginative games that draw some of the more clever people to the table but as human beings we are geared toward narrative construction regardless of how many elements we have at our disposal with which to do the constructing.  This is to say that we look toward single or few solutions to the narrative problems we encounter which causes, in terms of gameplay, us to default toward either a simple linear plot or one with few divergences.  It's in our nature and because of this it is up to the rules or guidelines to help us envision many paths and multiple potential outcomes.  With this sort of structure underlying gameplay, we can hopefully achieve a state of complexity in narrative without undue complications mechanically.  This is my mantra in design, Complexity without Complications. 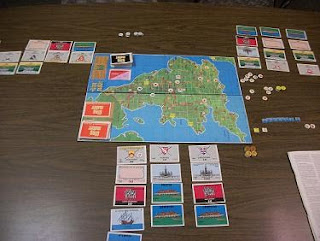 A traditionally-sized board for the three player game at Chicago Gameday 26 at Games Plus
But, you may ask, what specifically do we take from the one and migrate to the other?  It's a fair question and to claim I have a definitive answer just at this moment would be to deny that I am still mulling over many possibilities.  Some of the ideas are setting-oriented and best handled in the Grymvald Gazetteer at some later date but of the mechanics I can say that there needs to be some system for quantifying political strength beyond sheer force of arms available.  Some notions that are occasionally visited in rules, sometimes only as optional rules, such as Reputation, Fame or Renown, Honor, Diplomacy, Legitimacy, circumstances of birth, all have a place in the mechanics of a Medieval Fantasy ruleset.  I've been noodling around with the possibilities and will revisit this discussion prior to publication but for now, let's be clear, part of what I perceive as lacking in many games, that gets shrugged off as too complicated, is to my mind merely a matter of creating the right set of guidelines so that such matters can be more smoothly handled during gameplay.  I have been putting this to the test for some time and I further believe that such quantification will serve both an RPG and a wargame, and especially a game that unabashedly wears both monikers. 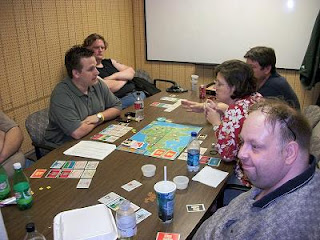 My regular gaming group in a six-player game as they gear up for a
politically-charged MF WARS - Grymvald campaign
Posted by Mark CMG Clover at 8:43 PM 2 comments:

It's been a long time coming. I had some thoughts about building this system for miniatures combat a decade ago but I am glad now that I did not. Part of what moved it to the backburner was the Open Game Movement, particularly the OGL and d20 System License, which created opportunities that were too tempting to ignore. Part of what kept it on the backburner was a series of advances on the wargaming rules side of the industry. What followed those early thoughts of system building were ten years of fun that has fueled what I believe is a much more organic process of creativity. The Medieval Fantasy Combat Miniatures Game (MF CMG) has become the groundwork for the Medieval Fantasy Wargame and Roleplaying System (MF WARS).  Both the combat minis game and the full wargame and roleplaying system will be the main focus of this blog.
Posted by Mark CMG Clover at 8:49 PM No comments: