The University of Glasgow is hosting an event this weekend that is being touted as the "biggest ever historical table top war game" though, technically, I suppose some might prefer it be called a floor game.  Read more here! 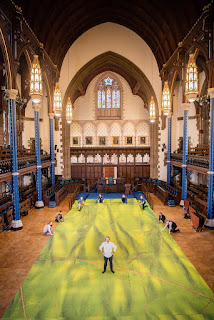 Posted by Mark CMG Clover at 9:00 AM No comments:

Over on David Wood's Dear Tony Blair blog from six years ago, he recounts his experience at the 2013 Salute gaming convention where a scaled up version of Tom Wham's Snits Revenge was being used.  I've borrowed a couple of his pics but there are several more so follow the link to his excellent blog.  Very cool! 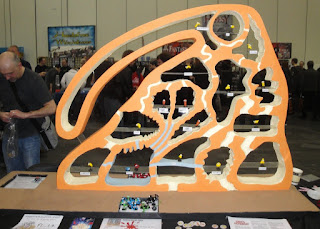 Brad and I joined Tom Wham for a game of Battling Space Ships.  Recently, Dave Conant took the rules Tom has been tweaking for a while and gave them the Game Crafters treatment, so Tom would have a prototype.  Tom was quick to point out this one wasn't really quite ready but I found it to be pretty well complete.  A couple of clarifications and some physical component adjustments, along with an art upgrade, and this one will be good to go, I think!

In Battling Space Ships, each player builds a number of ship in their dock attempting to send them out on cargo runs, send them to disrupt the cargo runs of other players, or to engage in space piracy in the shipping lanes against random deck-drawn ships.  Each turn, a player collects for cargo shipped the previous turn then draw cards face up from the main deck up to the number of players plus one.  The active layer then selects a card from the cards drawn as do the rest of the players in clockwise order.  All players may they build or upgrade any ships in the space dock.  Finally, the active player may choose to send any of his completed ships on a cargo run or out to battle.  Once someone builds three complete ships, the active player finishes their turn and the round is over, so victory points are tallied.  A game consists of two rounds.  Ship size gleans victory points, as does the number of ships and some special ship parts give bonuses.  These add to whatever was gained from cargo runs and battling during turns (which are scored right away) and the highest score wins. 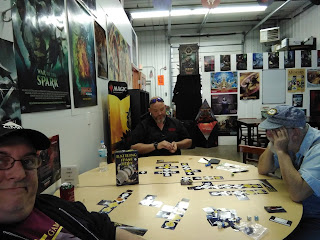 Posted by Mark CMG Clover at 8:50 AM No comments: