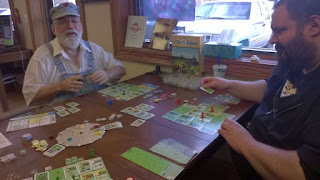 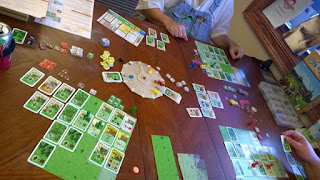 It took us a little bit to get going with this game and after a false start we played through quite a bit of the Ireland version of the game, then packed up and went down the street to try out the France version, which we played through to the end.  One can see how the Harvest series developed in some very good ways by the differences between this game and Le Havre.  One can also see what was retained and improved.  Flipping counters is still used for materials/goods and the processes for doing this is tied to buildings, largely.  We liked the addition of the rondel and how it acted both as a market for supply and demand and a countdown clock, in that once something sat around long enough to get relatively valuable, someone was going to grab it.  Waiting too long for some particular resource meant maybe not getting enough of it for your overall plan.  While it might seem odd that each player has three workers throughout the game, even as their monastery grows, this works well for this game as an abstraction that helps avoid needing to regularly feed, a mechanic that Le Havre relies on heavily.   I also enjoyed the concept of clearing land and gaining some resources thereby as well as space to grow the monastery.  I had some trouble reaching a competitive victory point total this first time around but enjoyed how the game allows for gameplay to reward accomplishments individually for what a single player is building alongside rewarding overall play comparatively with victory points. 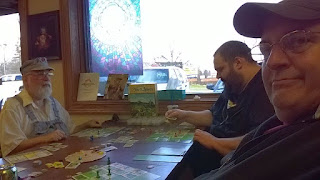