At Culver's last week, Jim brought out his copy of Quo Vadis? (1992).  I showed up a little late and didn't play but watched just the tail end of this game.  It's one I will have to try in the future as the theme definitely intrigues me. 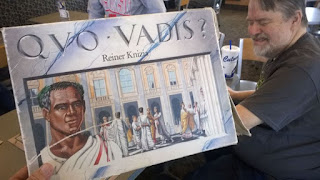 
In an interesting departure from his normally computational-heavy game structure, Reiner Knizia put together this negotiation game. Players are represented on the board by a group of politicians moving through a network of committees, and need to seek support from their competitors to advance upward toward the Senate. Supporting an opponent gains you prestige, needed in quantity at the end of the game. Once all five Senate positions are filled, the game is over, and only players who have a politician in the Senate are eligible to win. Of those players, whoever has the most prestige wins. 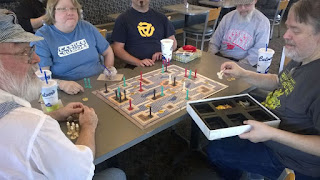 Simple components and clever mechanics make this an engaging game for clever players.  I'll post more on this after I get the chance to play it but think of this blog post as a placeholder and reminder to myself to make sure I make it happen. 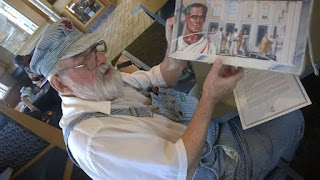