We managed to get one more game of Ora et Labora (2011) to the table last week, this time it was with Tom and Wendy.  Wendy hadn't played before but Tom and I had played often enough now to make teaching the game to someone else fairly simple.  She had played Le Havre before, so some of the nomenclature was already at her commend. 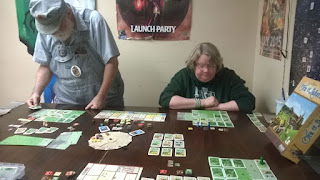 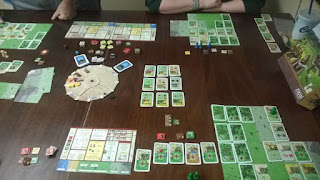 We played the French variant of the game which adds grapes and wine to the mix as well as bread.  I focused more on buildings that produce prestigious items and upgrades them, so I spent less time looking at buildings.  I think there were some points left on the table from buildings I could have had and that might give other players easy meat to pick up, so I need to be more careful in that regard.  I did get all of the top Settlements, so that worked out well but their placement could still be tweaked to get maximum points out of the buildings I place.  Still, it was a very good outcome even with such room for improvement. 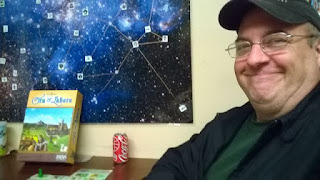