One of the more complex boardgames I have played recently is The Gallerist (2015).  My pal Wendy brought it to a Burlington Gameday where she, Kiff, Tom, and I worked our way through the rules with little prep.  A couple of us had the chance to briefly watch portions of a video and only one of us really glanced at the rules.  This works fine for simple games with few rules like Liar's Dice or Love Letter but for a game like The Gallerist with all new players involved, everyone who is going join in needs to take some time to learn at least the basics in advance.  A two-hour game need not take five to six hours to learn and play. 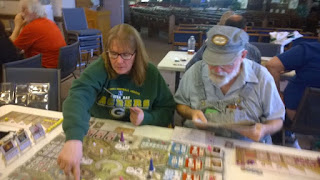 
This age of art and capitalism has created a need for a new occupation - The Gallerist.

Combining the elements of an Art dealer, museum curator, and Artists’ manager, you are about to take on that job! You will promote and nurture Artists; buy, display, and sell their Art; and build and exert your international reputation. As a result, you will achieve the respect needed to draw visitors to your Gallery from all over the world.

There's a lot of work to be done, but don't worry, you can hire assistants to help you achieve your goals. Build your fortune by running the most lucrative Gallery and secure your reputation as a world-class Gallerist!

Maximize your money and thus win the game by: 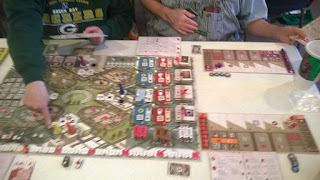 The game itself has a fair number of sub-systems in place to guide players through the different actions they can take, and they are well delineated within the rules.  Step-by-step instructions are easy to follow and need to happen in order so that the various resources are properly accounted, spent or accrued.  There's a limit to how much can be accomplished in any given turn and players will almost always wish to do more than they can, and this is fine.  It creates a need for long range planning and higher orders of strategy that helps in some less complex games but is required in games like The Gallerist.  Fortunately, there are also Kicked-Out actions which can be taken off-turn to increase how much can be accomplished in a game for each player.  Be prepared to use these but don't rely on them.  This is also a game with many ways to score points and many times during and at the end of the game that this can happen, plus combinations of those methods, not all of which need to be at odds with what other players are trying to achieve.  Competition between players can be direct, in-direct, or almost non-existent.  It'll take a few playthroughs of The Gallerist to really get a handle on it, even basic strategies, but that is in this game's favor.  With games like this, discovering more and more about them with each playthrough is part of their charm. 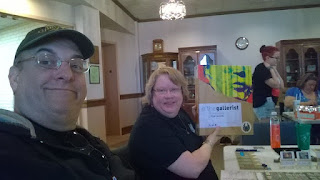