One of the play and win games at the Gaming Hoopla last weekend was Renaissance Wars (2015).  This is a wonderful looking game with beautiful artwork and boards and components.  I can't say enough about how great this game looks in person and I am sorry if my pictures below do not do it justice.  As soon as we opened the box, I fell in love with the idea of falling in love with this game.  If we had fun playing it, I intended to make sure I had a copy of this game before the weekend was over.  In this game, you get to play the part of a Renaissance luminary and-  Well, this is where things get a bit muddy . . . 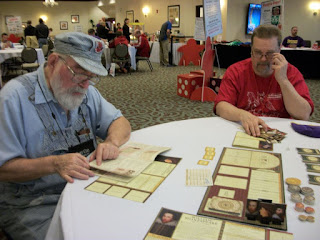 
It was a time of wealth and intrigue. A turbulent time, when wars were fought over religion and territory. A time when artists, architects and writers explored the nature and potential of man and a time when horizons were broadened so far, that a whole new world was discovered!

In Renaissance Wars you play the game as a Renaissance Luminary... someone whose influence and fame has transcended his own time! Using only your unique Luminary powers, the cards in your hand and cunning strategy, you will battle up to 3 opponents to accumulate the wealth and power necessary to dominate each era of the game.

But be careful... because when you least expect it, something may occur that completely upsets the balance of power and may destroy even the most carefully laid plans!

The base game contains 6 playable Luminaries - William Shakespeare, Martin Luther, Fillipo Brunelleschi, St. Ignatius of Loyola, Christopher Columbus and Francis Bacon - all of which come with their own unique Luminary Mats, cards and portraits. Up to 6 more Luminaries will be available in Special Editions.

Unique Event and Intrusion cards are randomly seeded into the game during set-up, so you never know exactly what you may encounter!

Featuring beautiful art and history, Renaissance Wars explores the people and events that made the Renaissance one of most interesting, creative and important historical eras. 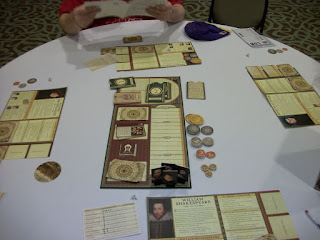 Our group had a dilly of a time sussing out the rules for this game.  I think we were at it for over an hour then jumped in despite not feeling we truly grasped it all.  Setting this game up was confusing to us and we had to do a couple of things twice to get it right, as far as we know.  We fumbled around with the first of three rounds for another hour then decided we had played enough and wanted to move on to another game.  It might have just been the time of day or coming off a big Portillo's lunch but this one just wasn't clicking with us.

As for luminaries having unique powers, some of them seem very similar with different thematic text draped over them, essentially mechanically the same.  The battling system felt convoluted and counter-intuitive, though I cannot say this for sure because we never were completely confident we understood what we were doing.  I'm not even sure the jargon of calling these battles and wars makes a whole lot of sense thematically.  Four of us, all experienced gamers, each had the rules in our own hands at several points over and hour before attempting to play.  This game has a pretty high rating on Board Game Geek, though from not all that many users and I wonder if that rating is accurate. 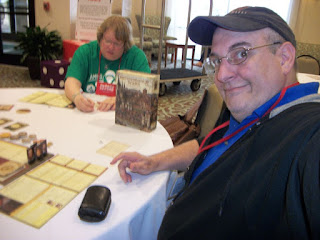