Back in 2012, I blogged here briefly about playing Age of Empires III: The Age of Discovery (2007) which was a fun game.  Just last year, Eagle-Gryphon Games upgraded that game, a bit of a facelift and much in the way of mechanical changes, and re-issued it as Empires: Age of Discovery (2015).  I had the chance to play this version against a few folks at the Gaming Hoopla last weekend.  Still a good game and an even niftier experience because of the custom version that was in use.  Metal doubloons were part of the game and the scoring track no longer circles the board.  As said, the game plays pretty much the same otherwise, from what I can recall from 2012 but there are a couple of optional additions which we used.  For me, this one definitely falls under the heading of being a wargamey-boardgame.  The battles and wars in the New World are absolutely crucial to the game and not simply window dressing or perfunctory. 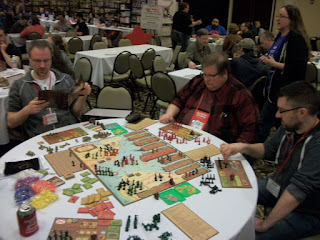 
Empires: Age of Discovery allows you to revisit the age of exploration and discovery. Take on the role of a colonial power seeking fame, glory, and riches in the New World. As you proceed through three ages, you launch expeditions of discovery, colonize regions, expand your merchant fleet, build capital buildings that give your nation distinct advantages, develop your economy, and (if necessary) declare war.

Empires: Age of Discovery is a reimplementation of Age of Empires III but without that name due to the expense of renewing the license from Microsoft. This edition includes the Empires: Builder Expansion along with its capital buildings; its National Advantage tiles have been built into the new player boards. 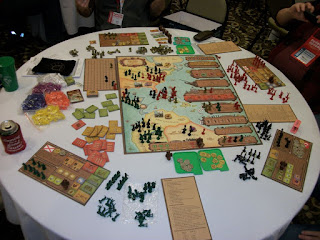 The additions include players being tied to specific nations and receiving some advantage in one area or another from that.  Spain gets a free colony early in the game while the Ottomans get to use their soldiers as if they are also missionaries, for example.  Pretty straightforward stuff though I wonder if they are balanced.  I'd have to play quite a few more times to check that out, so maybe looking around on BGG for more information and opinions on that might be wise if someone planned to pick this game up for their own shelf.  The new version includes the Builder expansion that was added tot he original game in 2011 as well.  Plus, there are player mats now, making it easier to keep track of staging your turn.  We did make one error that might be fairly significant, in that we wiped the buildings between each turn instead of just between ages.  That may have favored the players who were collecting buildings more since that strategy means you're grabbing the one you want most then seeing a whole new crop rather than allowing other players to build up some coinage and get something that fits one of the other strategies being used.  Otherwise, we seemed to be playing by the book and having a fine time doing so.  I look forward to playing this again. 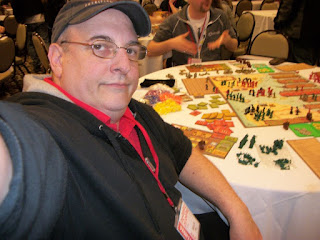