I have not played the old version or the new rendition yet but it sure was fun to see an original Parker Brothers set of Survive: Escape from Atlantis! (1982) on a table at the Gaming Hoopla.  Originally published simply as "Survive," the game has been around almost three and a half decades and has seen multiple releases over that time. 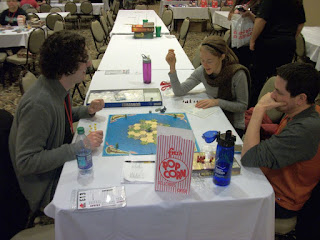 
Survive is a cutthroat game where players seek to evacuate their pieces from an island that is breaking up, while remembering where their highest-valued pieces are located to maximize their score.

An island made up of 40 hex-tiles is slowly sinking into the ocean (as the tiles are removed from the board). Each player controls ten people (valued from 1 to 6) that they try and move towards the safety of the surrounding islands before the main island finally blows up. Players can either swim or use boats to travel but must avoid sea serpents, whales and sharks on their way to safety.

Survive is very similar to Escape from Atlantis with some key differences.

Survive was reprinted as "Survive: Escape from Atlantis!" by publisher Stronghold Games and hit store shelves in February, 2011. The reprint contains the game Survive, as well as all the extra pieces needed in order to play the game as "Escape from Atlantis".

"Survive: Escape from Atlantis!" is game #2 in the Stronghold Games "Survivi Line". 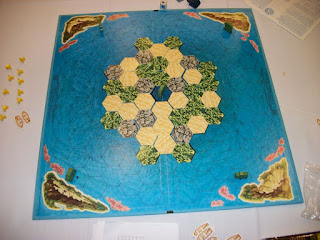 According to the forums on Board Game Geek, there are not only many expansions and variants, as well as lots of fan-made variants, for this game.  That bodes well for the replayability of it.  It's a classic concept with built in tension, escape from somewhere while time is running out.  It's a simple but good looking game, in its earliest form on up through today, and I've even seen some custom treatments (much in the same way that custom Catan boards are popular).  The game obviously has a following and a lot going for it and seems like one that can satisfy a broad age range.  I even noted there were some friendly coop variant rules floating around, pun intended. 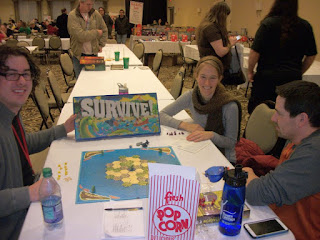