I think the last time we played Liar's Dice (1987) was late last year, and I posted about it here, but it gets sees the top of a game table around here a handful of times per year.  How it is that John hadn't played this game before is a mystery but Jim, Tom, and I introduced him to the wonderful world of Doubter's Dice (which Jim informed us was the original name!). 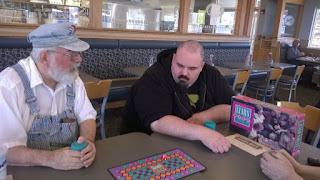 
Liar's Dice is a dice game where each player is given five dice and cup to roll and hide them with. Players make successively higher declarations regarding the results of all the dice remaining in the game, e.g. "there are ten sixes". However, someone can always contest the bid. When that happens, all the dice are revealed and either the bidder or the caller loses dice, depending on who was correct. The last player with dice is the winner. 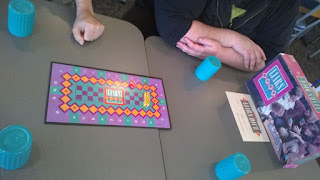 We played too quick games and I was out of each in record time.  I could claim that I was just showing John the ropes, but the truth of the matter is that Jim Ward is a colossal liar and a first class, blue ribbon, magnificent bastard.  I love Jim Ward with a burning hatred forged in the fires of dozens of lost games.  Should I one day meet him in a Valhalla for gamers, I will raise a mug of Mountain Dew to him, but this is not that day!  And he might have been lying about the original name, now that I think about it. That sunova . . . 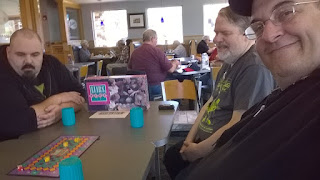