Sometimes games get played a number of times in rapid succession by several of the local groups even if the game has been around for a little while.  Such is the case lately with Istanbul (2014).  Fine by me since I like the game and we've managed to introduce it to a few new players in the process.  Interestingly, a lot of the playing has been with just the base game, not Kebab Shop or Coffee, and it holds up quite well without them.  That's not to say those aren't fun, just a comment on the strength of the original. 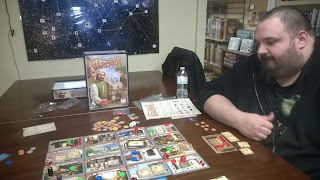 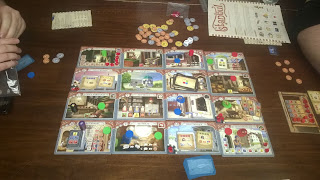 As always, the game is a puzzle that you are attempting to accomplish in as few moves as possible and in this game you are likely competing against your own previous attempts as much as against those sharing this time with you.  Naturally, how you play affects others and they with you so staying in the moment is of great importance, but it can't hurt to learn from game to game and try to smooth out your own rough edges between games, if smoothing can be done.  If you're using the fountain, for example, you probably have an extra move or two that could be trimmed from your game. 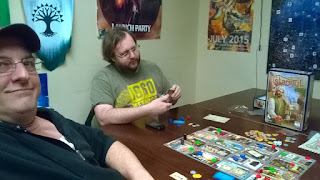