We played a quick card game as one of the play and win choices at the Gaming Hoopla last week called Scoundrel Society (2015).  In more recent years I've played an increasing number of simple, short card games.  One of the main reasons is time constraints.  It's nice to have some games available that can be played in a half hour to an hour for a little fun at lunchtime or at conventions and gamedays between other longer games.  Love Letter (2012) is a favorite, of course, and some of its variants have seen play locally, as well as some fan-made variants. 
The season is upon us once more: the time of year when the carefree rich escape from their oh-so-trying lives to idyllic retreats both near and far—and when we of The Society invite ourselves to their soirees, derbies, and day-to-day routines to play our annual game. This year’s mark has been carefully selected, and Constable Cramphorn is hot on our trail. And did I mention that you should watch your back? After all, stealing from a Society member is just as entertaining as fleecing a mark. So, do you have the lightest fingers, the snappiest patter, and the most disarming smile...or is this the year when you get nicked?

Scoundrel Society is the first Small Box/Big Fun game from Action Phase Games where players take on the role of a member of The Society, a gathering of notable con artists who come together once a year to show off their craft by proving who can steal the most loot from the mark without getting caught. Loot is lifted from the mark by playing one of five action cards, most of which work best when played alone. But tread carefully: while many pieces of loot have unique abilities that can affect the game, each carries a suspicion value. So when Constable Cramphorn is revealed from the last ten cards of the loot deck, the player with the highest suspicion score is apprehended, leaving the rest to compare the value of their ill-gotten gains to determine who is the most dirty and rotten of the Scoundrel Society. 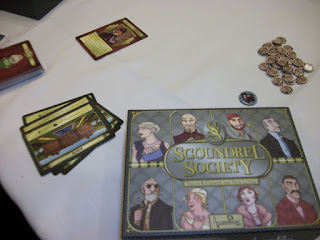 We played this one with four players.  It's a simple game with easy rules that we picked up fairly quickly and played fast enough in the first go around to feel the 30-45 minutes seems reasonable.  It's a nifty little game and easy enough for younger gamers to pick up.  The game has some bluffing elements and might make a good gateway for that type of game too.  It fills a nice niche or, rather, fits in with some other games like it in that niche but is worth adding to your mix if the theme strikes your fancy. 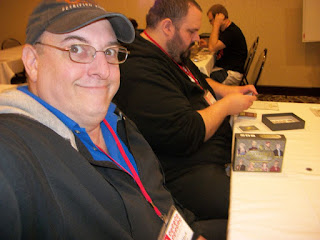