I've played Homesteaders (2009) on a couple of occasions and blogged about it a couple of times in the Summer of 2014 here and here.  It has been a while since I last played this but it came back to me quite quickly.  While I was a couple points off the lead at the end, I still feel I played well and am not sure how I might have improved with the strategy I chose. 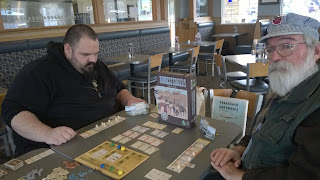 
Homesteaders is an auction and resource management game in which players bid on the opportunity to build certain types of buildings, then spend resource cubes to build one of several buildings of that type. The buildings confer abilities, income, and points; some automatically and some requiring a worker.

The game lasts ten rounds, with each round consisting of an auction phase followed by a building phase. After the last round, players take one final income phase and have one last chance to buy and sell goods and use their building abilities before scores are tallied.

Players score for their buildings, bonuses conferred by buildings, and points earned throughout the game from selling resource cubes. The player who builds the best combination of buildings and best manages the nine different resources in the game will score the most points and win – as long as they don't take on too much debt! 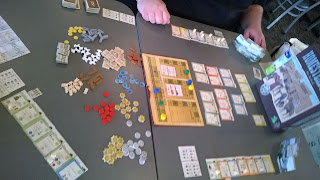 I approached this time around sticking with the idea that debt should be avoided.  I quickly grabbed a couple of buildings to ensure I'd have plenty of trade tokens throughout the game.  I've seen players who didn't have them languish and also know that in the final round of the game, extras can be used up making trades to snag a few extra victory points.  I even played a game once where that was the whole intent of my strategy, though that might have been excessive.  This time, I did it early and didn't worry about it the rest of the game.

Midway through, I picked up a Farm, as much for the Apple/Food as for the chance to take it from the later round just before another in an earlier round was to be removed from play.  I'm not sure if anyone would have wanted it at the stage, but it did decrease the options for other players that they might have hoped would still be there.  I also grabbed the Boarding House to eliminate one of two debts I had collected as well as for the ongoing income.  I don't think I was ever hard-pressed for Silver or Trade Tokens all game and that did put me into a position to purchase the circus in the last turn.  It nearly won me the game, I daresay. 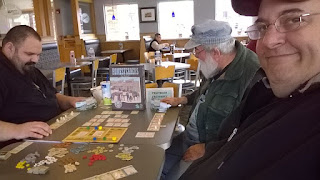