Although little could sound less appetizing, last time at Culver's we played Pirate Fluxx (2011).  The Fluxx line of games gets complex but as long as you can read the cards, they can often be silly and fun.  The artwork of Pirate Fluxx certainly gives that impression though I think the Monty Python version was even more so if you're a fan of their movies and television show from nearly half a century ago. 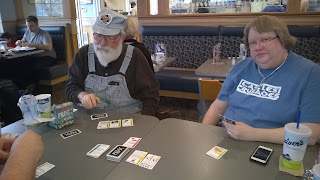 
Fluxx with a pirate twist. Getting the Captain's Hat allows you to have a good bit of control, but watch out for Scurvy and Shackles, which will keep you from winning. Grab lots of Booty keepers, maybe some Ships, and expect a few new Surprise cards along the way.

A pirate themed variant of Fluxx, this game is much like the original. Simply follow the rules that are currently in play. Start by drawing a card and playing a card, but even those can be changed. There's no way to win at the begining, but once a Goal card is played, you have to play the appropriate Keeper cards in front of you or play other cards to keep them away from everyone else, like Steal a Keeper or play a new goal card to replace the old one.

New to Fluxx are the Surprise cards which can be played at any time to cancel certain plays or steal a keeper as played. 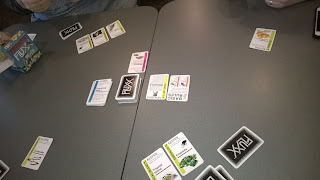 Being in control of the goal in this game is key to winning, as are having the cards to complete that goal and that ability to get them out on the table before anyone can stop you.  This is why it is also useful to be in charge of the rules as much as possible.  The problem is, there's no way no one else at the table is going to change some of that stuff, so once you're ready you have to strike quickly.  There's a lot of luck in this game, for sure, but they can still be fun with the right people. 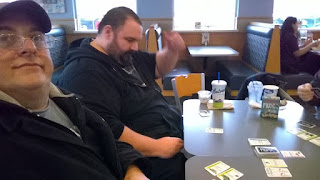