I've probably played close to a dozen games of Le Havre (2008) over the last couple of years, all but the first with the Le Grand Hameau (2010) expansion and it has proven challenging and exciting to play every time.  It truly is one of my favorite games to play. 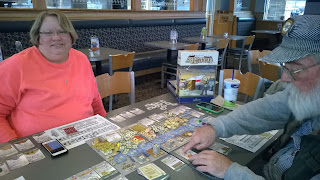 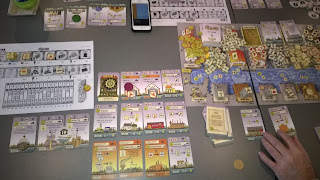 We had a very close three-player game that ended with a mere twenty or so points separating first place from last.  I tried something a bit different this game once I saw how the Special cards were shaking out.  I've never done mush shipping and didn't go that route this time but I secured both wharves and snagged the Wooden Crane as soon as it came up.  I also got hold of both the Marketplace and the Hardware Store.  Most of my buildings saw a lot of action and that was the plan.  I stayed away from Loans most of the game and unloaded them in the final action which was fine since I had cleared most of my goods and built up some nice cash reserves before then.  I was able to take full advantage of the Harvests almost from the start so between that and the building fees probably had more income than in any other game of this I have played.  All in all I felt very good about my strategy throughout.  I can't wait to play again! 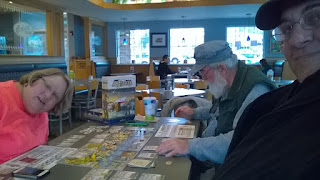