Incan Gold (2006) gets broken out round these parts whenever we get a large number of players and don't want to breakup into smaller groups, unless Liar's Dice is chosen instead.  It largely depends on who is there and what games they have available to them.  We enjoy both games so it's a toss up for me.  Sometimes, like recently, we play when even with just a handful of players.  I've blogged about our games of Incan Gold a couple of times before, here and here, so you can tell it is a mainstay at our local tables. 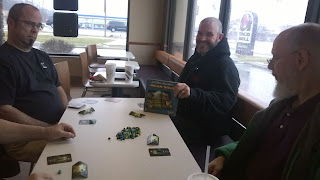 
Incan Gold is a quick, fun and tense game in which you and other adventurers explore an old Incan temple in search of gold and treasure. In each of the five rounds, you secretly choose if you want to continue exploring the temple in search of more treasure or retreat to the safety of your camp with your share of the treasure that has been discovered so far.

Each time that an explorer braves new territory, more treasure or a danger appears. When a second card of the same type of danger is turned over, all exposed treasure is buried, leaving the remaining adventurers with nothing. Do you flee the dangerous temple with your portion of the treasure that has been uncovered so far or do you venture into the exciting temple in search of more hidden valuables?

After five rounds of exploration, whoever has the most treasure is the ultimate explorer and winner!

From the publisher: "You and your fellow adventurers travel to Peru to find a ruined Incan temple and its treasures: turquoise, obsidian and gold. There are also rumors of valuable Incan artifacts. Will you chance dangers like giant spiders, mummies and fire during your search, or will you escape back to camp and safety, carrying out your loot?" 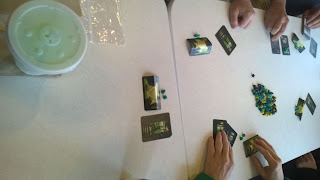 I've mentioned in the past how much we enjoy this game because of the number of players it can support.  I've also discusses that we enjoy press your luck games, and that still holds true.  But to delve a bit more into strategy with this game, I have to say you certainly need to be flexible.  What other players do will definitely be very important to your own path toward victory.  This time around, I found that getting an early cache of gems forced others to press their luck much more than I have seen in the past.  While this allowed me to play more conservatively, the chance for an Idol to allow someone to catch up was ever-present.  I wouldn't advise being timid in later rounds even if you have a substantial lead, or suspect you do.  Also, keep a close eye on what others are stashing in their tents.  Knowing just how close others are has to influence your decisions as the game progresses. 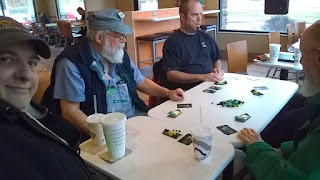