Local gamer and family man Jacob popped by the Gather of Gamers last weekend with his son and broke out a couple of games including Evolution (2014).  I'd heard of this one in passing but hadn't played it yet so this was a real treat.  It has some complexity to it, but not a lot of moving parts, so it's easy to pick up quickly.  Five of us played and I think the final scores were all pretty damned close.  The game has solid, if simple, components and colorful artwork that fits well with the theme.  The cards are of sturdy construction and the iconography works well.  Once you learn the basic rules, all you need is textually on each card you draw. 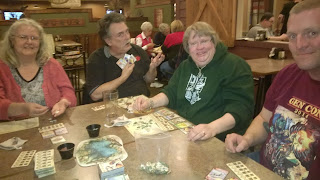 
In Evolution, players adapt their species in a dynamic ecosystem where food is scarce and predators lurk. Traits like Hard Shell and Horns will protect your species from Carnivores, while a Long Neck will help them get food that others cannot reach. With over 4,000 ways to evolve your species, every game becomes a different adventure.

Evolution packs a surprising amount of variety for a game with simple rules. The variety comes from the synergies between the trait cards and from the different personalities at the table. Some players thrive on creating Carnivores to wreak havoc on their fellow players. Others prefer to stay protected and mind their own business. Evolution encourages both play styles by giving each of them multiple paths to victory. And it is the mix of play styles at the table that ultimately determines the eco-system in which the player are adapting. So gather your friends and see who can best adapt to the changing world around them. 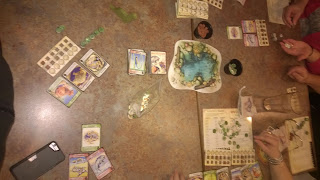 My advice for this game is to go big rather than try to get too many species into play all at once.  It seems to me that unless you can seriously protect your main species, as well any additional species from predators, your secondary species will simply become a food source for the other players and help them gain more food tokens (which are the prime source of victory points in the game).  If you do start up a second or even a third species, make it earn its keep as a predator.  If you wait until you get the cards to support this strategy, you'll manage to have a second species with a net gain.  I'll need to play more to really test these ideas and I look forward to doing just that! 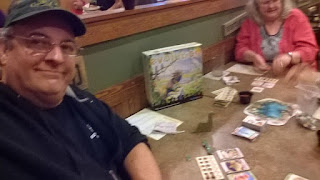