Last Second Sunday at Lake Geneva Games, a few of us got to play Roll for the Galaxy (2014), and we played it four times in a row.  Not everyone loves playing a game even twice in a row but I personally love when I get the chance to play something multiple time.  While I have blogged about this a couple of times last year, I guess it's been a few months since I played it.  But this is one of those games that comes right back to you.  In fact, several of the games wound up with some of the highest scores, all around, that I have seen in games I have played of it. 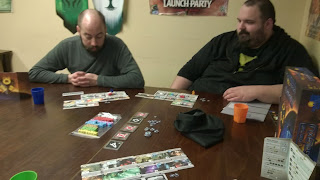 
Roll for the Galaxy is a dice game of building space empires for 2–5 players. Your dice represent your populace, whom you direct to develop new technologies, settle worlds, and ship goods. The player who best manages his workers and builds the most prosperous empire wins!

This dice version of Race for the Galaxy takes players on a new journey through the Galaxy, but with the feel of the original game. 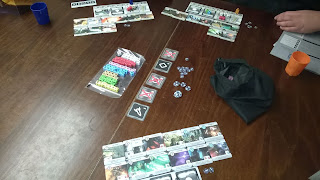 I think, in the past, we did a lot less producing and shipping thus not getting as high of scores.  Also, games in the past tended to end with someone completing their 12 tiles galaxy.  This still happened but not before most of the victory point chips were claimed.  Plus, rather than producing and shipping being an after thought, galaxies were built to facilitate the producing and and shipping more readily.  I will definitely be trying to build on these new strategies in future games. 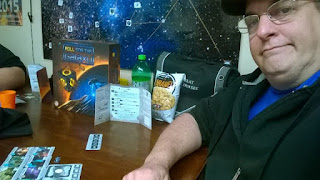