I wrote about Ra (1999) last Saturday (here) and we've been playing it quite a bit since, so I thought I'd revisit it today in the Nostalgia Thursday.  It is from last century, after all.  We love how fast this game plays even if set up is a bit long, sorting the tiles.  We've discussed using a draw bag but haven't pulled the trigger on that modification yet. 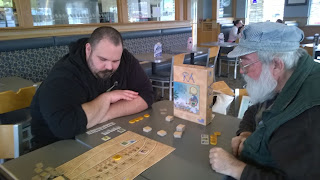 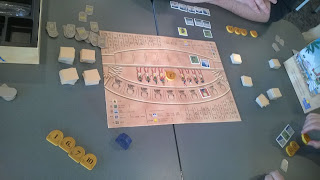 The more we play, the closer the final scores of the games seem to become.  I've been pleased how well snagging groups of Monuments has proven to keep me close or not in first place.  Definitely avoid being odd man out when it comes to Civilization tiles.  Worse, still, coming up with the lowest total Bidding Tiles at the end of the game can spoil and otherwise good finale.  While snagging God tiles when they come around is beneficial if they come with other useful tiles, using them costs a drawing turn so they have a hidden cost.  Watch out for tile killers unless at least part of their cost is covered in the available array and a decent trade up on bidding tiles is in the offing. 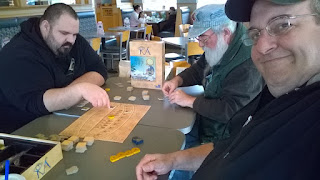