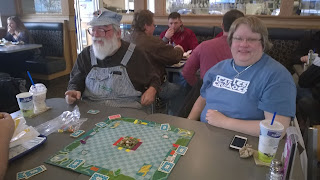 
In Trade Winds, players collect treasure to accumulate enough points to win. Players can attack and rob other players ships.

Not enough?  I'll elucidate further in the last section of this post. 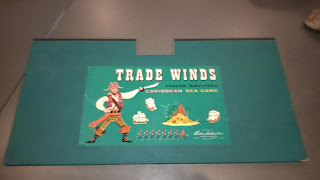 In Trade Winds, players have a hidden hand of cards that determines both their fighting strength and movement.  Cards depicts crew members in a range from one to three and a player's movement is the total of what they have in their hand.  However, crew cards can be either red or black and the strength of a ship is the difference between the total red in hand and the total black in hand.  You start the game with five, IIRC, but there is no actual limit and there are a number of circumstances under which your hand size can change.  First, you can leave as many cards in your home port as you like, though other players or even you can stop by and scoop them up, exchanging an equal number of crew points from your hand.  This is how a player manages to get as close as possible to having all red or all black crew cards in their hand to maximize their strength. 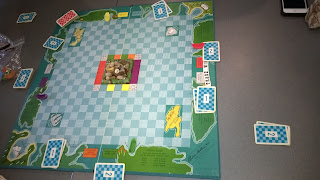 Each player has a home port and there are four additional neutral ports as well as two bays and a center island where most of the game treasure will reside.  Neutral ports start with a few crew cards which a player, when docking there, may exchange with crew cards form their hand provided they leave behind the same number of points as taken.  The center island is piled high with rum barrels (worth two points), pearls (worth three points), gold bars (worth four points), and gems (worth five points).  The object of the game is to go and gather as much treasure as your ship can carry, eventually winding up with 21 points of treasure at your home port.  If you drop a piece of treasure on the board while loading it into your tiny ship, it is gone.  If you knock over your ship and spill all your treasure, it is gone.  If you don't keep an eye on your home port after stashing some treasure there, other players can swoop in and exchange crew points for treasure in equal amounts and limp away to their own home ports. 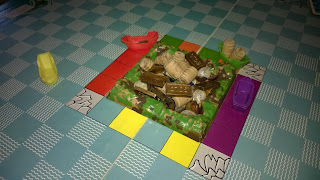 There is also an event deck from which each player must draw each turn.  Some banish a pirate ship to an isolated bay, effectively detouring your plans.  Other require you to go to one port or another (often the "closest" port) and make some exchange or perform some task.  Sometimes, whole crews are exchanged with the nearest pirate on the high seas.  In the course of your treasure collection a player can even sail up next to another ship and challenge them by comparing crews, potentially gaining some or all of their treasure.  Fortunes change in this game from time to time so it does require players to be flexible in their strategies.  Solid game, particularly for one that is older than me.  OLDER than me! 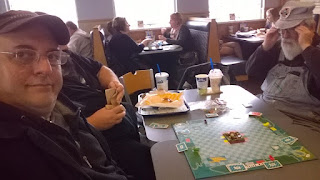