Lately, we've been playing the clever little game of Ra (1999).  It's a Reiner Knizia design that combines auctioning, set collecting, and has a press your luck element.  It plays very quickly, under an hour.  With the right three people, I could see this game regularly running lass than half an hour.  This game could benefit from a tile drawing bag; a big one.  Much of the time we spend on it is for setup, and that's too bad because we play it a lot and would probably even play it more if there was less hassle to it. 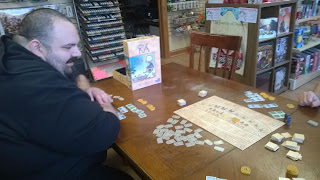 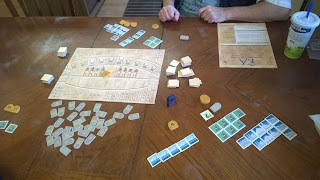 There's a fairness to this game that cannot be denied.  You make your own fate from round to round.  You're playing chicken with your opponents even as your mining the tiles for the best combinations and points.  Taking negative points in this game can ruin your chances to score well.  I'd definitely advise making sure to get a Civilization tile and gaining enough Pharaoh tiles to not have the fewest.  There's simply little chance to win if you have received penalties for either situation more than once, sometimes at all.  Keep a close eye on the Monuments.  I've seen a nice set of Monuments win someone the game more than a few times and it can even help with a comeback.  God tiles are useful as are the Money tiles but they're not crucial.  If you can get a God tile early in any given round, it's worth throwing it in to snag something to assist in another set as often as not.  The Nile and Flood tiles have rarely seemed very important in the games we have played.  They add up, granted, but not often to a whole lot. 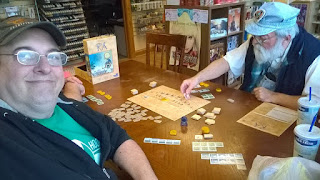