At the last Burlington Gameday and the Gathering of Gamers in Elkhorn, though I have no pictures from the former, we played The King's Abbey (2016) among other things.  This was a recently fulfilled Kickstarter that a handful of my friends picked up.  Laura brought her copy on Saturday and taught a group of us then Wendy brought hers to the Gathering and asked me to show what I had learned the previous day.  It's a nicely complex game with a good combination of well-loved mechanics combined well with a theme that is one of my favorites. 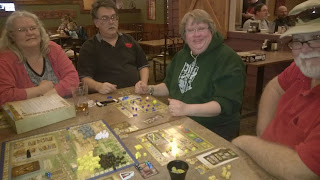 
In AD 1096, hope fills the air like a bird's song after a long winter, the seeming endless road of the Dark Ages may soon come to an end. For years now, warlords have roamed the land, every surface is covered with filth, and disease has ripped through towns like great tornadoes. King Sivolc has dreamed that building a great gothic structure is the answer to leave this Dark Age behind forever. But for the last decade, there has been a massive decline in the building activity, and hardly any great cultural achievements have been made.

Recently, while on one of his crusades, King Sivolc met a master architect named Elias. Elias told the King about his devotion to the mortar arts and how he longed to build a structure so great that people would travel hundreds of miles just to gaze at it. This meeting created a spark that ignited the King’s dream with a fire that would burn away even the darkest of days forever. King Sivolc looks on from his castle and watches with great expectation as his dream becomes a reality. With Elias’ help, he has hired some of the greatest architects and monks in the land to complete this task. He waits patiently for this great abbey to be raised from the earth, filled with people, changing the course of history forever!

The King's Abbey is a worker placement/resource management game in which each player has their own player board that represents the abbey they have been tasked to build. Players take charge of monks that are represented by ten dice as they go out and gather resources, go on crusades, construct buildings, train clergy, bring in peasants, and defend their abbey against the darkness. Each player does this by rolling their dice and then assigning each die (monk) to different places on their player board, resource boards, and crusade cards. The places on the player boards will bring in peasants and train clergy. The places on the resource boards will give them wood, grain, stone, and sand for building the various parts of their individual abbeys.

Each player receives prestige (victory points) for completing crusades and constructing various things in their abbey such as towers and different kinds of buildings. The game proceeds over a total of seven rounds where the "darkness" becomes greater each round. The darkness represents things like depression, famine, raiders attacking, and other things that the Dark Ages brought with it. You fight the darkness by keeping the defenses of your abbey strong. Players are trying to have the most prestige than any other player by the end of the seventh round.

After seven rounds, players add up all prestige earned. Whoever has the most prestige wins the game! 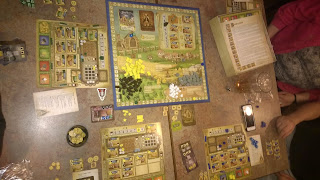 Both times I've played, a couple of the rules were misapplied but I won't blame this on the rules themselves.  I think it is just a complex game and we juggled them as best we could with a quick training sessions and off to the races playing.  That's fine enough as I don't think it hurt either game's outcome dramatically.  Just the same, I would also say that this isn't the kind of game where I'd be overly worried if you don't feel you've grasped everything the first couple / few gameplays.  There's a lot going on and not only will it take a few games to see how the parts work with one another, it might be a bit before you figure out the best way to make it work in a strong strategy.  I think it is worth it and will tackle this game again! 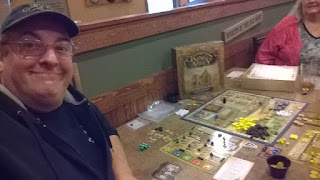