Okay, okay.  Too many posts about Ra (1999)?  I suppose that might be true since we have played a lot recently, I have enjoyed it more and more each time, and all of those posts have been since the new year started.  But I double checked and this is only the third from me this year on Ra, only my third on it ever, so I'll just leave this here and try to pipe down about it moving forward. 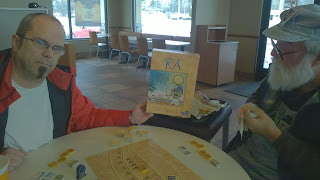 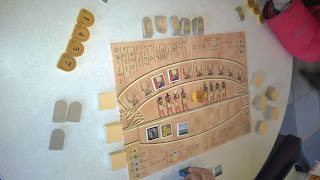 There are big draw bags that come with other games on the market that need to be employed with Ra.  This point was driven home when we recently played Roll for the Galaxy (2014) [blog post coming on this Saturday].  There's just no way around.  Or maybe two bags could be used to have one at each end of the table.  I can't stress enough how much more quickly set up would be facilitated by this addition.  If you use two bags, as part of setup, you dump all the draw tiles into one bag, mix them up, them dump about half into the other bag before starting.  Someone could even call for the bags to switch ends if they feel they need to "change the luck."  I'm not a big believer in that sort of thing but I've been known to change my dice mid-game from time to time.  Anyway, that's it on Ra for now.  Get some bags, you'll thank me later.

*Edit* - So, it seems that the game originally comes with a draw bag but the folks I play with have either lost them or simply don't use them.  I stand corrected, bemused, and more than a little disgruntled! 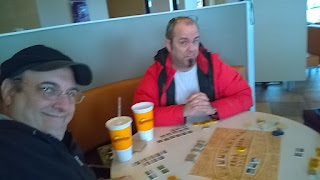