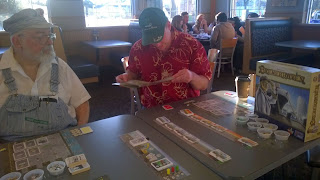 
Bremerhaven is a clearly structured but complex economic game about the famous harbor town in the north of Germany. Each player builds his own unique harbor and tries to reach the highest combination of money and prestige by the end of the game.

Each round, players are trying to get the most influence on the action fields they want to use. Since you place your influence cards face down, you have to watch closely what the other players might want to do. (You can even place more than one card on one spot.) The options are varied: Get a new ship with new goods into your harbor, close a new contract, change the values of the four different goods, improve your influence card-hand, expand your harbor, buy a new building, or simply rise in the nautical ranks to get more money. But you have to be careful: Every ship and every contract will stay in your harbor only for a short while. (The transporters and trains are waiting!) If you fail to coordinate the incoming and outgoing goods, you might have to pay penalty for not fulfilling a contract!

Bremerhaven ends after a defined number of rounds, and the rules include both a short version and solo rules. Visually the game will be in the vein of Le Havre. 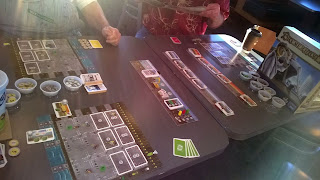 Honestly, in the year and a half that separated when I first played and this chance to play, I recalled very little of how to play or what I might have learned the first time around.  I was coming at this fairly fresh.  Nevertheless, as I subsequently read over my old blog on the game, I certainly played like I recalled how to do so.  It didn't help.  My new assessment is that money is a huge factor in this game.  Keeping up or close with other players in the Influence category is a must but it is easier to advance your wealth than you Influence, so that is the side of the equation where you should concentrate.  We'll see what I think after my next time through. 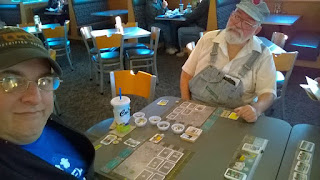