It's the 60th anniversary of Careers (1955) and Tom brought it out to Culver's for some of us to try.  I wasn't even aware of the game before he dropped it on the table and figured it would be something along the lines of The Game of Life (1960) but found it much more interesting than that.


Careers is a game where the players set their own victory conditions. A player may choose to pursue Fame, Happiness, Money, or a combination of all three. The limitation being that the total number of "points" earned in the 3 categories must total 60. eg. 60 Happiness, 0 Fame, 0 Money; 20 of each; or any other combination. The players endeavor to fulfill their goal by going through any number of different "occupation paths". All paths have some prerequisite for entry, and benefits accrue from going through any of the paths more than once. The different occupations are designed to be suited to different strategies, eg. Hollywood is good for fame points, while "Going to Sea" is good for happiness. In the end it is the player (or team of players) who gets to their pre-set goal first who will be the winner, and achieve everything they ever wanted in life. 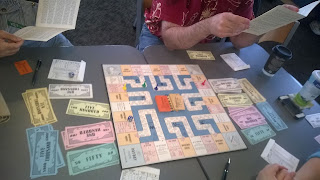 Despite having a roll and move mechanic, there is a good amount of strategizing that can be done to mitigate it, so I didn't find that aspect problematic.  It all comes down to choosing a combination of Wealth, Happiness, and Fame that you feel you can fulfill before the other players manage their own prediction, and then getting to it no matter what obstacles or setbacks befall you.  The inner "side tracks" are the occupations and each has a number of setbacks within them, as does the outer path which is more about gaining opportunity cards.  The completion of inner tracks gains very useful experience cards which can help with future movement, and avoiding the need to roll the dice for movement.  It's a very cool design for an older game.  I hope to get another chance to play and will keep my eyes open at flea markets and thrift stores for copies of this classic! 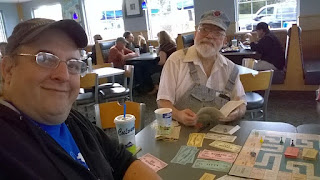