One of the fun things about conventions where Tom Wham is present is getting to play in one of his Feudality (2011) games. 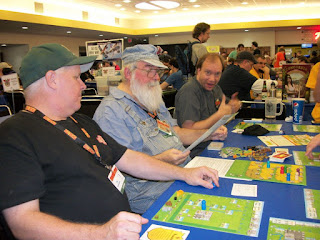 
A long time ago in Europe, ages were pretty dark. The distribution of wealth back then left a lot to be desired. Greedy people banded together to take things from other people so that the rich could get richer and the poor could have even less. Twas ever thus. Step into the middle of the normal state of human affairs as a Baron or Baroness somewhere almost in Europe a long time ago. Thanks to your birth you have a lot of little people working to make you richer, and you, in turn, are doing your best to make your king even more prosperous. If you do things right, you might someday be king.

Each player starts with a Fiefdom Management card, divided into 64 squares (49 of which can have tiles played on them. Into four of these squares you deploy your Keep, in which you will put your fortification of some sort, and your soldiers. Elsewhere in your land you deploy assorted resource gatherers and buildings in an effort to grow, prosper, and score victory points. Along the way there may be wars, invasions, tournaments, taxes, and a lot of other nonsense. 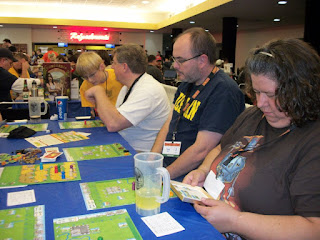 I try to work a somewhat different strategy every time I play, to keep it fresh, but it almost always includes hoarding tiles that will gain me Victory Points.  After all, that is ultimately the way to win.  Although it is good to have some variety in the resources you might garner, it's also a good idea to have one resources on more tiles than any others (except Victory Points).  This always gives you the chance to trade four to one if you come up short on any of the other resources.  This time, I didn't do much with military tiles though I did build my fortification up rather quickly.  I was right in the thick of it up until the end, though I miss victory by a single point.  Great game! 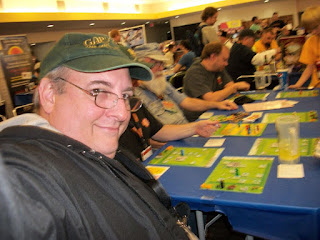