My buddy Wayne was kind enough to break out his copy of 1775: Rebellion (2013) at a recent Gathering of Gamers in Elkhorn, WI, so we played, then played again, and played a third since we were tied up two-to-two.  The third game ended in a tie and we had no time for a fourth game.  I think this speaks to how well balanced this game is. 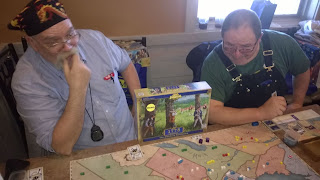 
The Birth of America series continues with The American Revolution.

In 1775: Rebellion, players take the roles of the American Continental Army and Patriots against the British Army and the Loyalists. Each side tries to control the colonies, provinces and territories. They call on the aid of Native Americans, as well as the German Hessians and French Army in order to successfully birth a revolution or quell the rebellion. The four factions each use their own deck of cards to move their units into positions. Battles are resolved quickly with custom dice. If you can control an entire colony, province or territory you raise a flag. When the game ends with the signing of the Treaty of Paris, the side with the most flag markers is the winner.

1775: Rebellion uses the same basic mechanisms as 1812: The Invasion of Canada, but to a different end result. The game is quicker (being 2-4 player) and the intermingling of units at the beginning of the game allows the action to start immediately. There are a few core rules that changed in order to better portray the goals of the war. 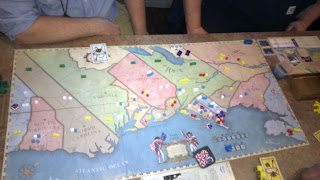 This game falls into that nebulous category of games I call the "Wargamey Boardgame" which includes both older games by wargame companies that are more like strategy boardgames and modern boardgames that have many wargaming elements.  I found it to be both challenging and intriguing.  It's not difficult to master and the dice, as well as each players' draw deck, will definitely influence the strategies chosen on the battlefields but I think much of the luck can be mitigated by the configuration of the board (the colonies and the areas in them) as well as timing assaults cleverly.  In that way, I think it gives the game more replayability than one might assume based on the limited card decks.  Keeping your forces mixed to allow for both members of a side to maximize their options is a must, and it further increases the number of dice being thrown at any given conflict.  It's also a good looking game, simply presented.  I will definitely play this again and hope to try out some of the other in the series. 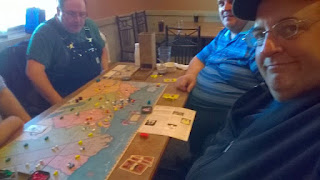