While I was at GameHole Con 2015, I got the chance to try a game I hadn't played before.  Trans Europa (2005) is a simple network building game where each player tries to connect a number of location in the least amount of moves while other do the same.  My buddy Tom picked it out for us to play while we had an hour to kill before some other events because, well, trains. 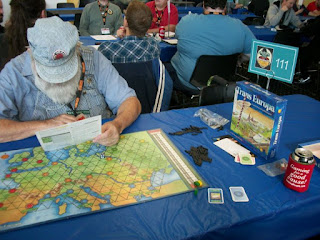 
Now it is time to go railroading in Europa. Just like TransAmerica, players work together building a railroad network, but this time it is across Europe instead of the United States. The first to have their five cities connected wins the round - the others lose points for being too slow! After 3-4 rounds, the player with the most points wins the game! 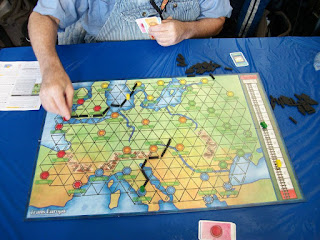 As I said, simple game to learn but ultimately the game is about deception.  Ideally, your opponent(s) will create some tracks into which you can also connect to complete your own routes, thus saving you moves and costing points to your opponent(s).  Definitely a game worth picking up as a filler game as a plays fast and is easy to setup.  Lots of fun! 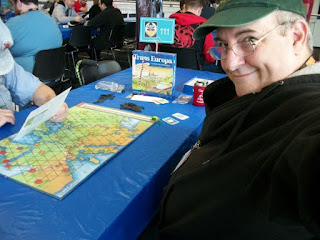