A trip late last month to a Half Price Books store outside of Milwaukee, WI, got me excited.  On a top shelf, in their gaming section, they had a bunch of older wargaming books, with six of them by Donald F. Featherstone (1918-2013), one of the fathers of modern wargaming.  He wrote more than three dozen books on gaming in his lifetime and some of the most comprehensive were at HPB. 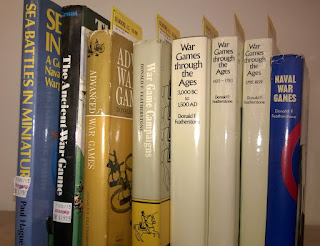 In particular, I was interested in his "War Games through the Ages" series of which the first three of four were on the shelf.  These volumes were in excellent shape and were written and published in the early to mid-1970s.  Since I'm not someone who needs to be a completist, and since I am also primarily a pre-gunpowder wargamer (with some sci-fi, fantasy, and tall ships thrown in), not getting the fourth volume didn't bother me.

I was also pleased to turn into the front page and see that these three were first printings.  Despite how clean they are, and how collectible, reading at least the first volume is definitely going to happen.  It's the biggest volume and covers the longest period, as one might expect given how much more we know of the history following the period covered, 3000 BC-1500 AD. 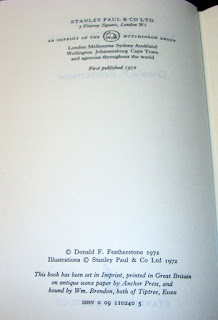