I'm not sure why Shipyard (2009) doesn't get more play with our crowd and around local events.  I think it's a very solid game with a lot going on all the time. In the past, I've played it quite a bit but I don't think I've seen it on the table more than a couple of times (none with me playing) since my blog post about it here in October of last year. 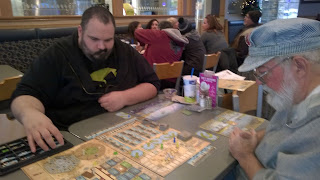 
We’re in 19th century, sea transport is more and more important. Both corporations and naval forces require newer and newer ships. Try to put yourself in the role of their manufacturers. Hire employees, buy accessories, get favour of evaluating committees. Don’t forget to rent a canal and you can heave anchor.

Players take turns, beginning with a randomly selected player and continuing around the table clockwise. On their turn, they will choose one of the available actions from the Action Track. The action will get the player something they need to help build their ships. On the player's next turn, they will move that Action Card ahead of all the others and choose a different action.

If a player completes a ship on their turn (ships consists of little cards depicting bows, sterns, and (preferably several) middle pieces with several options to add equipment or crew), it is taken out for a shakedown cruise in a canal, during which they may score points for speed, crew, equipment, or safety.

As players take their turns, the line of Action Cards will advance around the Action Track. When the lead Action Card reaches the Starting Space again, the countdown marker moves down one space, and play continues.

The game ends when the countdown marker reaches the finish space. (It can also end early if the players run out of Ship Cards.) Bonus points are scored for Government Contracts, and the player with the most points wins. 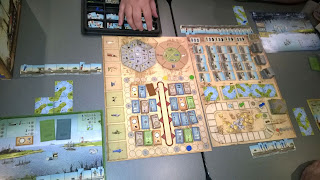 It took me a bit to refresh my memory on the rules this time around, so I know I didn't make full use of my contracts, and I think I obsessed too much with getting in bonus actions when I might have better served my scoring by focusing on better canal configuration.  I think I left quite a few points on the table in that regard.  Nevertheless, I still find this game challenging and fun so I look forward to the next time I can play it. 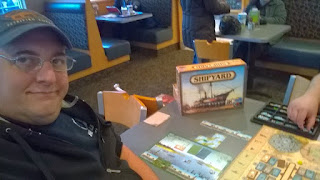