The other day at a newly renovated Taco Bell, Tom was kind enough to break out his copy of Square Mile (1962).  The box was in bad shape, so it was reboxed with the rules in the box top saved, but has all the components so it is good to go.  This game is as old as I am and yet it plays like a modern boardgame in many respects. 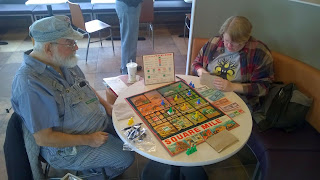 
Players compete to develop a square mile of raw land and turn it into a thriving community. The player who buys, sells, and builds most wisely and makes the most money will be the winner. Considered "ahead of its time," the game features a modular board and winning turns on being the most efficient in the use of one's actions. The only randomness in the game is in the board set-up and determining who goes first. 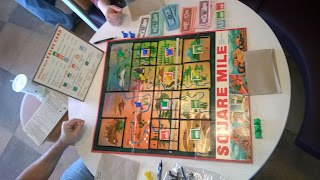 The setup of the board adds an element of randomness to each playthrough and an advanced version can mix it up even further.  The independent selling, independent building, and interactive auctioning each player turn makes it very dynamic.  Keeping a balance between money invested and cash on hand is a tricky business, and risk management is the order of the game.  Pushing the limits on how much you own versus being poised to own more is a constant concern.  I could play this quite a bit more which is more than I can say about games one-fifth its age.  Great fun! 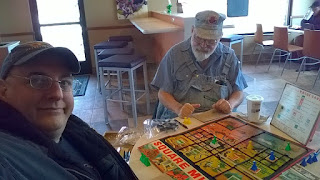