We recently set Alien Frontiers (2010) back up on the table again.  I've played it several times before, each time with increasingly more expansion components.  We've mostly played it with four or five people in the past.  This time, with just three people, we played the base game with no expansions and it really impressed me. 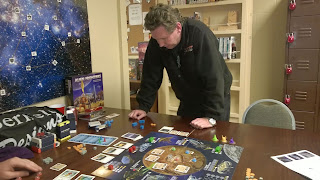 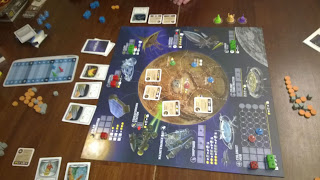 So, why was I impressed?  Because the balance of the game keeps the end game interesting without making the players feel as if they've worked hard for no reason. That is to say, while it requires players to be on their toes the whole game, if you do a good job exploiting a strategy, you can be in the hunt for victory right up to the end.   In this latest game, once one player triggered the end by putting out his last colony, the subsequent player was able to wrest victory away, and the last player was then also able to make some moves that barely squeezed out a victory for them.  And it was never obvious that this was a foregone conclusion.  That's the mark of a good game, in my opinion. 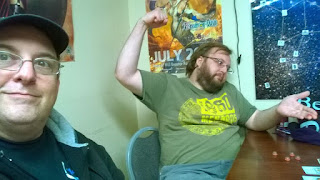