The events catalog and online events/games widget for GameHole Con 2015 didn't have a category for "Wargaming."  Aside from Role Playing Game, Seminar, Card Game, and Other Event, they had Boardgame and Miniatures as the two categories where Wargames would probably fit, Miniatures being definite Wargames (except in the case of the big Hackmaster RPG harbor display) and with Boardgames including some though mostly of the modern wargamey-boardgame variety rather than hex/square-and-chit wargames.  This was my first GameHole Con and the third one to take place.  They have moved from their original location in the Sheridan to the main convention center, the Alliant Energy Center, and they have plenty of room to grow.  I play so many boardgames and get in plenty of RPGing most of the year, so I tend to try and find wargames to play when I go to conventions. 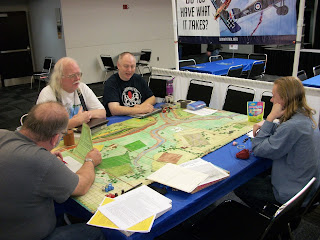 As to the boardgame wargames, and wargamey-boardgames of the modern era, it would take a lot more time than I have to scour through the whole catalog to divine everything being run.  A quick shout to George Henion for keeping Dawn Patrol on the map and kicking off the convention in the first slot with it.  That does always make a convention official, if you know what I mean.  I saw several slots of History of the World being run by Mike Moderski, but that's more of a Civ game, I suppose (which I love, of course!).  Twilight Imperium was run by Victor Calzoni, and they were huge, eight-person games.  That's a great game for conventions, IMO.  As I say, I was only there for a short while on Friday in the late afternoon, then on Saturday and Sunday from mid-morning to mid-afternoon.  The online catalog is still up if you'd like to dig deeper. 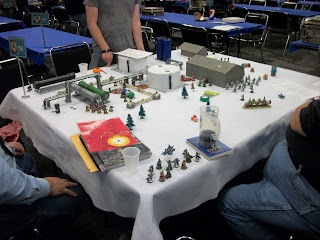 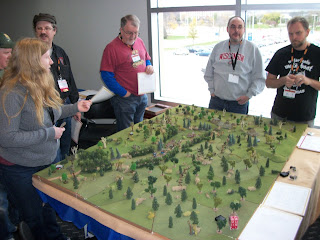