I played a game that was new to me yesterday called Bremerhaven (2013).  I guess this one caught a little flack when it came out because some folks assumed from the artwork on the box and the theme that it would be very much like Le Havre (2008) and it isn't.  Both revolve around the action of a seaport but from there the two games diverge significantly.  I'll say right now that I enjoy both.  I've played quite a bit of the latter and will certainly play Bremerhaven again as well.  As described on Board Game Geek:


Bremerhaven is a clearly structured but complex economic game about the famous harbor town in the north of Germany. Each player builds his own unique harbor and tries to reach the highest combination of money and prestige by the end of the game.

Each round, players are trying to get the most influence on the action fields they want to use. Since you place your influence cards face down, you have to watch closely what the other players might want to do. (You can even place more than one card on one spot.) The options are varied: Get a new ship with new goods into your harbor, close a new contract, change the values of the four different goods, improve your influence card-hand, expand your harbor, buy a new building, or simply rise in the nautical ranks to get more money. But you have to be careful: Every ship and every contract will stay in your harbor only for a short while. (The transporters and trains are waiting!) If you fail to coordinate the incoming and outgoing goods, you might have to pay penalty for not fulfilling a contract!

Bremerhaven ends after a defined number of rounds, and the rules include both a short version and solo rules. 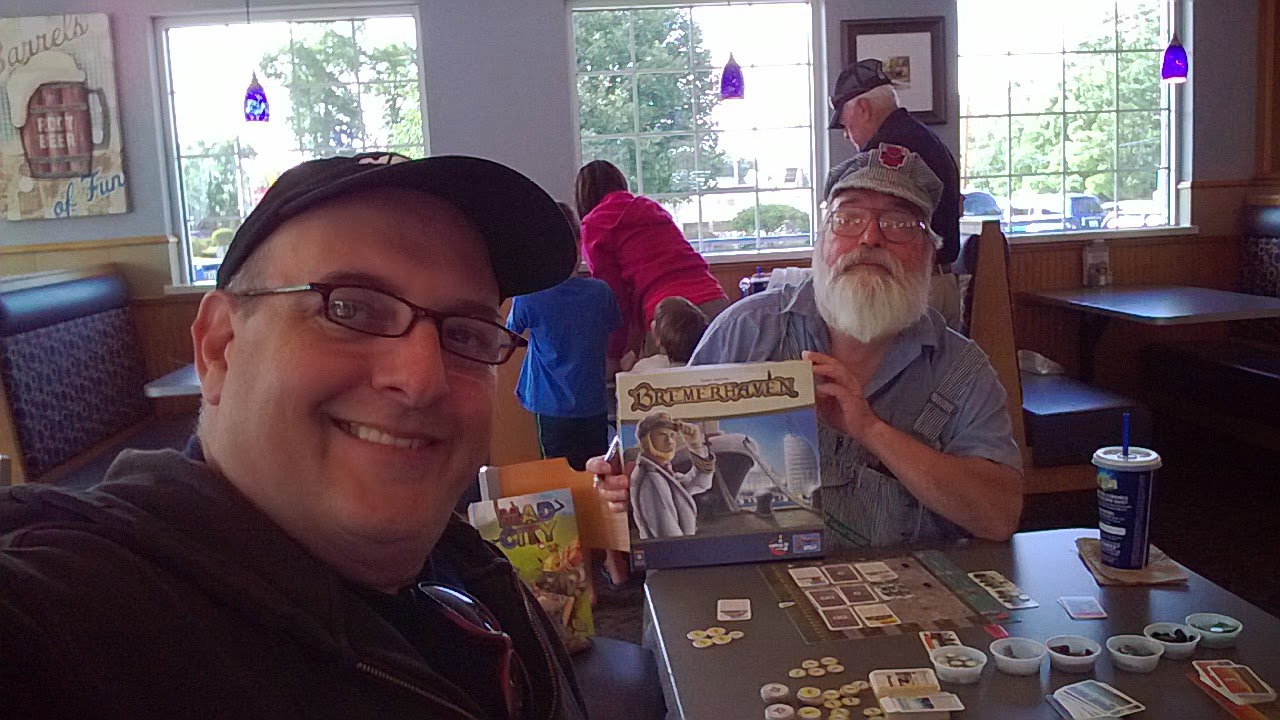 Improving your influence cards as early as you can is crucial to the ongoing accumulation of influence and securing building rights each turn is a necessity.  The only question for the latter is how best to utilize those rights and strategies can seemingly be fairly diverse: expand your harbor, acquire buildings, or simply use the highest bid status to drain some funds from your opponents.  All are valid reasons to bid high for those rights.  Wealth is a huge deal in the game as it multiplies with your influence total at the end to give you your final victory points.  It's likely you can do well in this game if you can avoid getting into too many bidding wars for incoming ships/goods and for contracts.  It's also seemingly wise to try and time your contract to come to fruition at moments when you have little competition in that regard so you can attempt to adjust the prices of goods and get the lion's share for them.  The game really is all about the timing in many regards and it appears to be a game where you can increase your mastery of that timing with repeat playing, regardless of the randomness of cards: ships, contracts, buildings, and events.  Those factors are important in each game but the overarching strategies will always be predicated on your own combining of those elements in a way that is well-orchestrated.