Kingsburg (2007), from Fantasy Flight Games, is a boardgame I've played dozens and dozens of times of the past handful of years.  They've added a couple of expansion packs, as FFG is wont to do, and I've played with most of these regularly.  Only one of the expansions from the pack has proven to be too troublesome for me to regularly incorporate.  The copy I bought is the Fantasy Flight Games edition.  Gameplay is moderately complex and goes as follows, per Boardgamegeek.com:


In Kingsburg, players are Lords sent from the King to administer frontier territories.

The game takes place over five years, a total of 20 turns. In every year, there are 3 production seasons for collecting resources, building structures, and training troops. Every fourth turn is the winter, in which all the players must fight an invading army. Each player must face the invaders, so this is not a cooperative game.

The resources to build structures and train troops are collected by influencing the advisers in the King's Council. Players place their influence dice on members of the Council. The player with the lowest influence dice sum will be the first one to choose where to spend his/her influence; this acts as a way of balancing poor dice rolling. Even with a very unlucky roll, a clever player can still come out from the Council with a good number of resources and/or soldiers.

Each adviser on the King's Council will award different resources or allocate soldiers, victory points, and other advantages to the player who was able to influence him/her for the current turn.

At the end of five years, the player who best developed his assigned territory and most pleased the King through the Council is the winner.

Many alternate strategies are possible to win: will you go for the military way, disregarding economic and prestige buildings, or will you aim to complete the big Cathedral to please the King? Will you use the Merchant's Guild to gain more influence in the Council, or will you go for balanced development?

The rules for Kingsburg (2007) are available on the Fantasy Flight Games website as a Free PDF download here (and directly here). 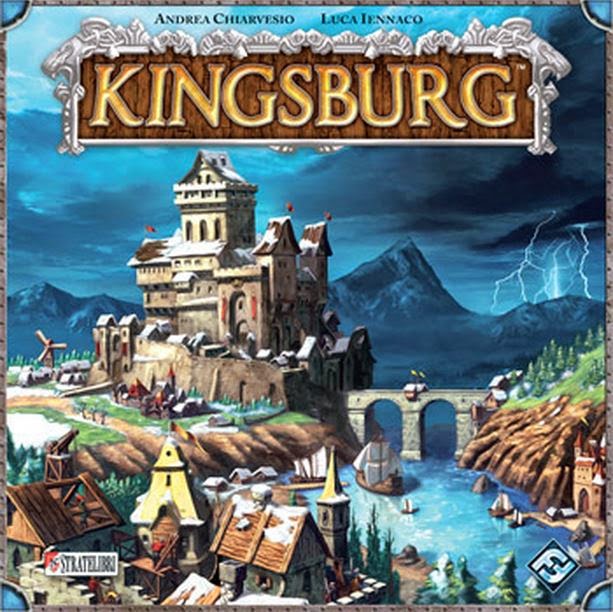 The Kingsburg: To Forge a Realm (2009) adds a great deal to the game with only a bit more complexity.  Mostly, it increases the options of the players, enriching the game.  Again, in summary, as per Boardgamegeek.com [I've added in the proper names of the components in brackets following each entry]:


The expansion is composed by five "modules". One or more modules can be added to the game in order to customize it to your liking (or to have a slightly different challenge each time).

-- seven "alternative rows" of buildings (each replacing one of the seven standard ones; each player gets two of these during setup and thus has a slightly different board than the others to manage) [14 Alternate Building Rows, 2 each of seven kinds]

-- more than twenty Characters (each one with a special ability; every player gets one of them and enjoys his/her special power for the whole game) [24 Governor Cards]

-- more than twenty Events (they are shuffled and one is revealed at the start of each year, producing a special effect for that year only, which may be helpful, neutral or detrimental, but it's always applied to all players) [29 Destiny Cards]

-- an alternative (deterministic) way to handle wintry reinforcements (rather than the die, each player gets six tokens numbered 0, 1, 1, 2, 3, and 4 during setup; at the beginning of each Winter you use and discard a token to get that many extra soldiers from the King). [30 Soldier Tokens, 6 for each color/player] 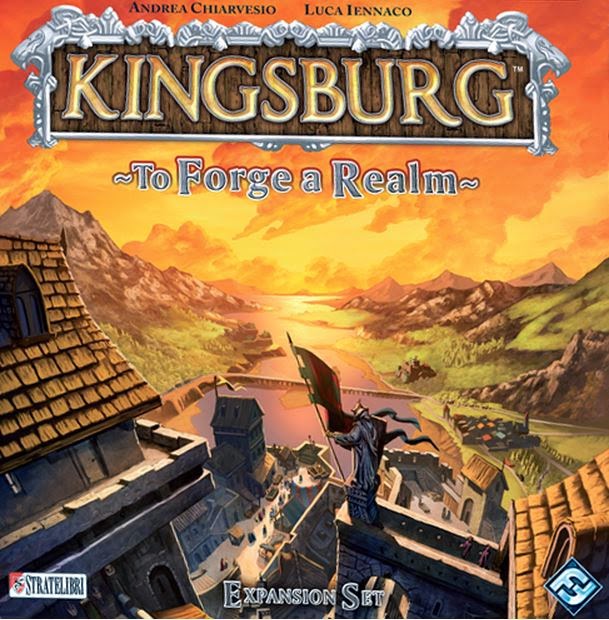 The rules for Kingsburg: To Forge a Realm (2009) are available on the Fantasy Flight Games website as a Free PDF download here (and directly here).

As for my own thoughts on the game, I have loved it from first blush.  We, meaning the folks I regularly play with, moved to using the expansion quickly and rarely do I play without four of the five.  What doesn't see much use are the alternate rows.  It's mostly a physical complaint as perhaps we're just a bunch of fumble-fingers and keep knocking them around too much, slowing the game.  I've thought a bit about making a couple of alterations/alternative options for the game.

Firstly, I have wondered what it might be like to make some seven row cards with nothing but the expansion/alternate rows.  I've scanned the rows and might put together five full cards someday when I find a little free time and the proper motivation.  That might make for an interesting variant though I honestly have no expectations about how it would play out.

Along the similar lines, I was thinking it might be cool to deal out four of the Governor cards to each player, allowing them to secretly choose one for each of the first four years, all players revealing their choice together at the beginning of the year.  In the fifth year, you can either re-use one of the four (again, chosen secretly, or take a random card from the remanding deck.  Choice of this would begin with the player who has the least victory points going into the last year, and onward up from there.  Since there are only 24 cards, in a five player game, the leading player might just be stuck re-using one of his previously used Governor Cards and not have the option to draw a random card.

So, just some thoughts on the game that are largely echoed by players of this game.  I don't find many who don't care for it and few who like it who do not use the expansions.