In a recent post on the Surcoat (2016) Medieval Fantasy Wargame System here, I outlined some of the many influences on me while wargaming for more than forty years and working on these rules over the last decade and a half.  As said then, "My goal is to produce a rather simple, straightforward set of unit-to-unit Medieval Fantasy wargaming rules that can scale nicely to handle combat for very large armies utilizing a d20 as the primary resolution method and which players can buy in for almost nothing more than their time and imagination." 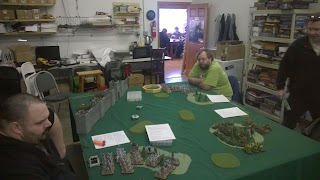 Additionally, the intention is for someone to be able to use these rules seamlessly alongside an RPG to handle conflict beyond the one-figure-equals-one-individual level.  To my way of thinking, most skirmish level combat rules aren't much different from the combat rules embedded within many RPGs.  With little to no modification, an RPG combat system should be able to handle skirmish level battles.  However, once one scales up to army level combats where a unit represents ten, fifty, or even one hundred individuals, it takes a different type of rule set to do this effectively. 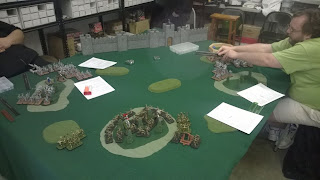 From what I have seen over the forty-five years I have been a avid tabletop gamer (first of wargames then RPGs when they were invented in the mid-1970s), when an army level wargame rule set is designed to work in tandem with an RPG, it seems awkward.  In some areas, abstractions are made or assumed while in other areas, skirmish level rules are substituted so that individual characters can be shoehorned into the action.  This tends to be where such systems breakdown.  They fail to recognize that in the grand scheme of things, individuals cannot make a huge difference on army level combats except as generals and leaders of units.  I'm hoping that Surcoat is seen as a way of smoothing out that awkwardness and manifests as a system that can be integrated into RPGs of many stripes.  We will see. 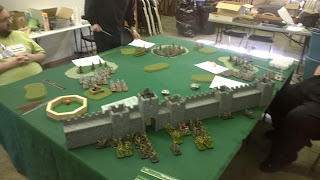