I've had the pleasure of playing Tom Wham's Greedy Billionaires a few times before and have written about it on this blog a couple of time here and here.  Tom has told me this game was originally conceived decades ago and then sat for some time before being rediscovered and rewritten several times since.  It was recently featured at Gary Con VII and a couple of new rules adjustments went into effect there as well.  It's a humorous send up of Monopoly-style games with some fun quirks all its own. 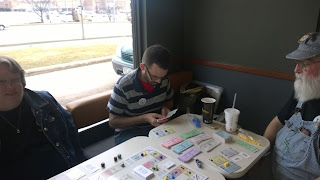 The description is as follows:


Each player takes turns collecting business properties and attempting to get them to pay out as often as possible to finish with the greatest wealth. 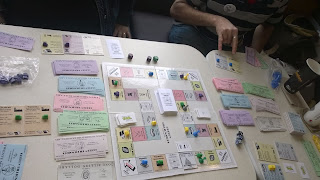 Each time I've played, there have been some improvements but, honestly, this game played very well the first time I tried it.  The well-known Tom Wham humor shines through in the artwork and naming conventions.  There is plenty to keep players busy between turns and the dice mechanics sidestep the old roll-and-move problem of similar games (you roll 3d6 but first call whether you wish to move the total or just the number on the single lowest or single highest die).  It's good fun and I recommend it if you get the chance to play. 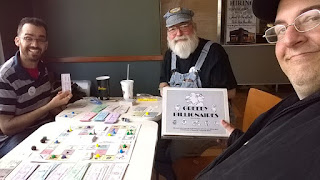