I've had trouble in the past doing well at Revolution! (2009).  In a recent game I found a way to do much better but I'm not sure I can attribute it to anything but luck. 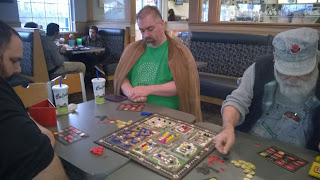 
Blackmail the printer. Threaten the innkeeper. Bribe the priest. Welcome to Revolution!

Secretly bid against your opponents to gain victory points, control territories (worth victory points at the end of the game) and collect more Gold, Blackmail, and Force tokens for the next round of bidding! Will you try to control the tavern or the fortress? The harbor or the plantation? Knowing where to push for points – and where to back away and let your opponents fight – is the key to victory. Whoever has the most victory points at the end of the game wins. It's a game of bluff, counter-bluff, and surprise!

Bidding tokens have different shapes and colors for easy identification. Colorful cardstock shields keep your bids private, and also provide a handy rules reference during the auction. Brightly-colored wooden blocks allow players to see, at a glance, who controls which colonial-themed territories.

Revolution! is for three or four players. The rules can be taught in minutes, and a complete game takes less than an hour. Each new game lets players find new strategies and tactics.

Get ready for Revolution! 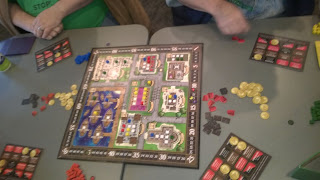 While this game purports to be about reading what other people will do and finding ways to thwart them while still advancing ones own agenda, the only thing to really read is the territories.  There is no direct negotiation or discussion (as far as the rules are concerned) so there isn't really any bluffing and counter-bluffing.  The only trick I have found to this game is to make sure and grab up points every turn.  This allows you to worry less about which territories you control and as long as you have at least a couple, you'll be in the running. 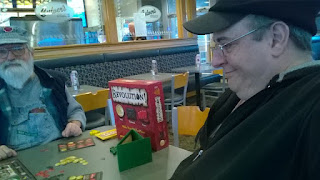