I've played Istanbul (2014) a handful of times, including once with the Istanbul: Mocha & Baksheesh (2015) expansion and often enough with the Istanbul: Kebab Shop Mini Expansion (2014) but the game plays just fine in its original form.  I've dipped my toe back in the original waters a couple of times and it's still just as challenging and well-balanced whether it is with experienced or new players.  Once the game is understood, anyone should be able to step up and compete at this game rather quickly which is amazing since it is a fairly complex game. 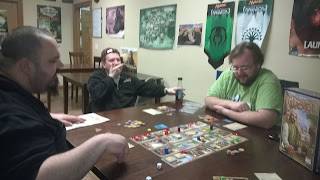 The description from Board Game Geek is as follow:


In Istanbul, you lead a group of one merchant and four assistants through 16 locations in the bazaar. At each such location, you can carry out a specific action. The challenge, though, is that to take an action, you must move your merchant and an assistant there, then leave the assistant behind (to handle all the details while you focus on larger matters). If you want to use that assistant again later, your merchant must return to that location to pick him up. Thus, you must plan ahead carefully to avoid being left with no assistants and thus unable to do anything... 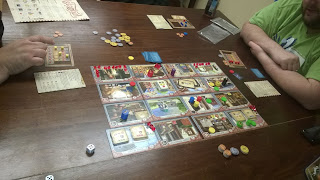 This time around I decided to forego spending too much early time at the warehouses and focused on gaining cards quickly, allowing other actions to be whatever proved convenient to furthering that main tactic.  Admittedly, I slipped into the Police Station once when it wasn't in immediate furtherance of that goal but both the Smuggler and the Governor were there at the time, so it technically was still an attempt to get a bonus card.  About half way through the game I let the cards dictate my plans and doubled up on the PO and also the Gem Dealer.  Along the way I did get a ruby for filling out my wheelbarrow and gaining the ruby from the Great Mosque, so I was poised to win when I ran into someone's family member and gained enough money to visit the Gem Dealer a third time immediately before someone else would have gotten their fifth from that same place.  It was lucky but I suppose I was in a position to take advantage of that luck which is part of the game. 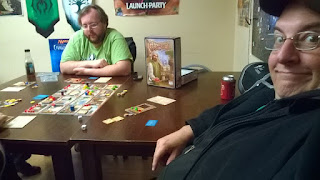