In the past year I may have played and taught Tiny Epic Galaxies (2015) more than any other.  Even though I don't personally own the game, so many of the local gamers got in on the Kickstarter for it and it is so easy to bring along that there is almost always a copy at any gameday or event.  I still have yet to play it with the expansion and still have fun with it simply as is.  At a recent Burlington Gameday, I was asked to teach two new players who picked it up quickly as an experienced player and I joined in as well. 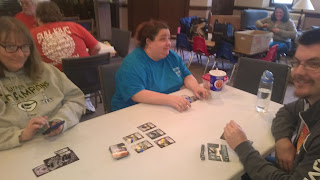 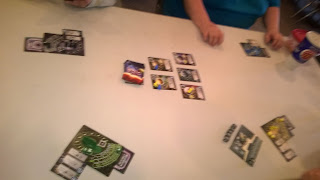 Another close game though one player fell behind a bit early in the empire building.  Those three points and not getting a mission complete can make a huge difference in the end unless your strategy compensates for it by gathering lots of planets quickly and using colony actions when others can't or don't have any worth using.  Culture and Following are still points to stress while teaching and even when a player doesn't take it immediately to heart, it quickly becomes apparent during gameplay and that reinforces the concept. 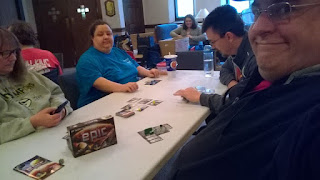