Often when a game resurfaces locally it winds up being played a handful of times before it gets re-shelved for a while.  This allows for some building on recent strategies while they are still fresh in the mind.  This has been true lately of Praetor (2014). 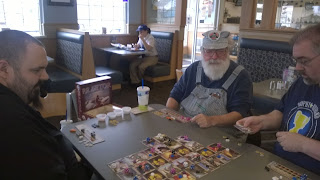 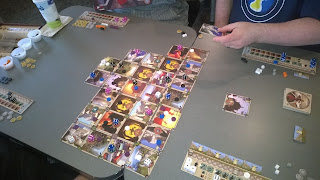 First, I didn't completely abandon my thinking regarding wall sections.  I'm getting close though.  Building a wall section might be too obvious a choice and too easily predictable, and thus too easily thwarted.  Too that end, piling up resources rather than playing things close to the bone also has merit.  The ability to do almost anything available any given turn outweighs the possibility of being stuck with one-tenth of a victory point at the end of the game.  In fact, some of the best scores I have seen have gone to players with piles of resources at the end.  So, too, owning the city tile which allows retirees to work seems to be useful.  I need some more time with this one but I feel I can be competiative with it now whereas I often got my hat handed to me in the past. 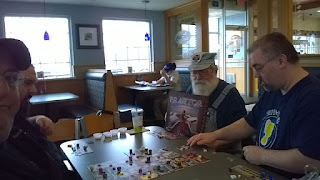