One of the treats of having an Old School oriented convention like Gary Con is it gives the chance to play some of the gems of wargaming in their original form without the pressure to use some updated or newfangled version.  One can run a 1E AD&D game and not be told that 5E D&D is a preferred choice.  You can set up a session of Civilization (1980) without being pressured into playing the lesser "Advanced" rendition or combining the slot with the newer Mega version.  And you can still play an annual game of Divine Right (1979) with a handful of like-minded gamers who understand that six hours might be too little time for a full game but at least you get a good enough game accomplished. 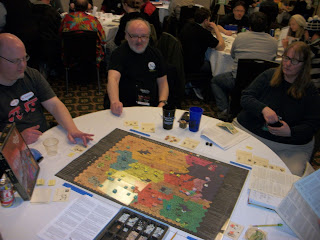 
Classic game of fantasy empires clashing. Each player controls a unique realm and attempts to use diplomacy and might to ascend to rulership. A colorful map and a host of fantastic creatures bring out a fleshed out fantasy world.

You expected more?  Maybe it does need some additions . . . such as:


The mechanics of this game are fine if you like wargames. If you're more of a modern-era boardgamer, it might be too fiddly. The base game is fairly simple once you know how movement, sieges, and combat work. The Advanced game adds tons of additional factions, powers, magic, that all are basically sub-systems and work in their own peculiar ways. A sentence or two explains each one but with dozens of them, it requires keeping the rule book to hand. 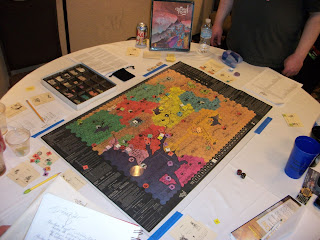 This year's game didn't squeeze in quite as many turns as in previous Gary Cons but was nonetheless conflict-filled.  Folks got right to the business of war which doesn't always happen.  Despite everyone's best efforts, plundering castles was turning out to be very difficult and in the end a couple of non-player monarch assassinations set up two players for a shared victory.  Not pretty but that's that game. 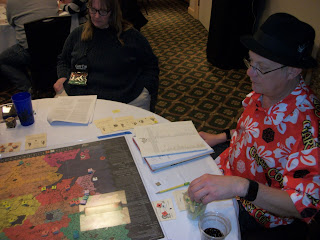