I could have saved this for a Nostalgia Thursday post or Wargaming Wednesday by some estimations, or even Systems Saturday, as the mechanics of this game are different enough from the field that El Grande really does stand out in that regard.  Let's get that wargame discussion out of the way early, though, as I'm not convinced that this one crosses over quite as much as some say.  Literally, by the text and theme, no one is waging war.  You are moving troops and influencing lands, controlling them even, but no actual war is waged in the playing of this game.  That said, it has some elements that feel like some wargames so I would think the folks who generally restrict their gaming to wargames might want to look this one over. 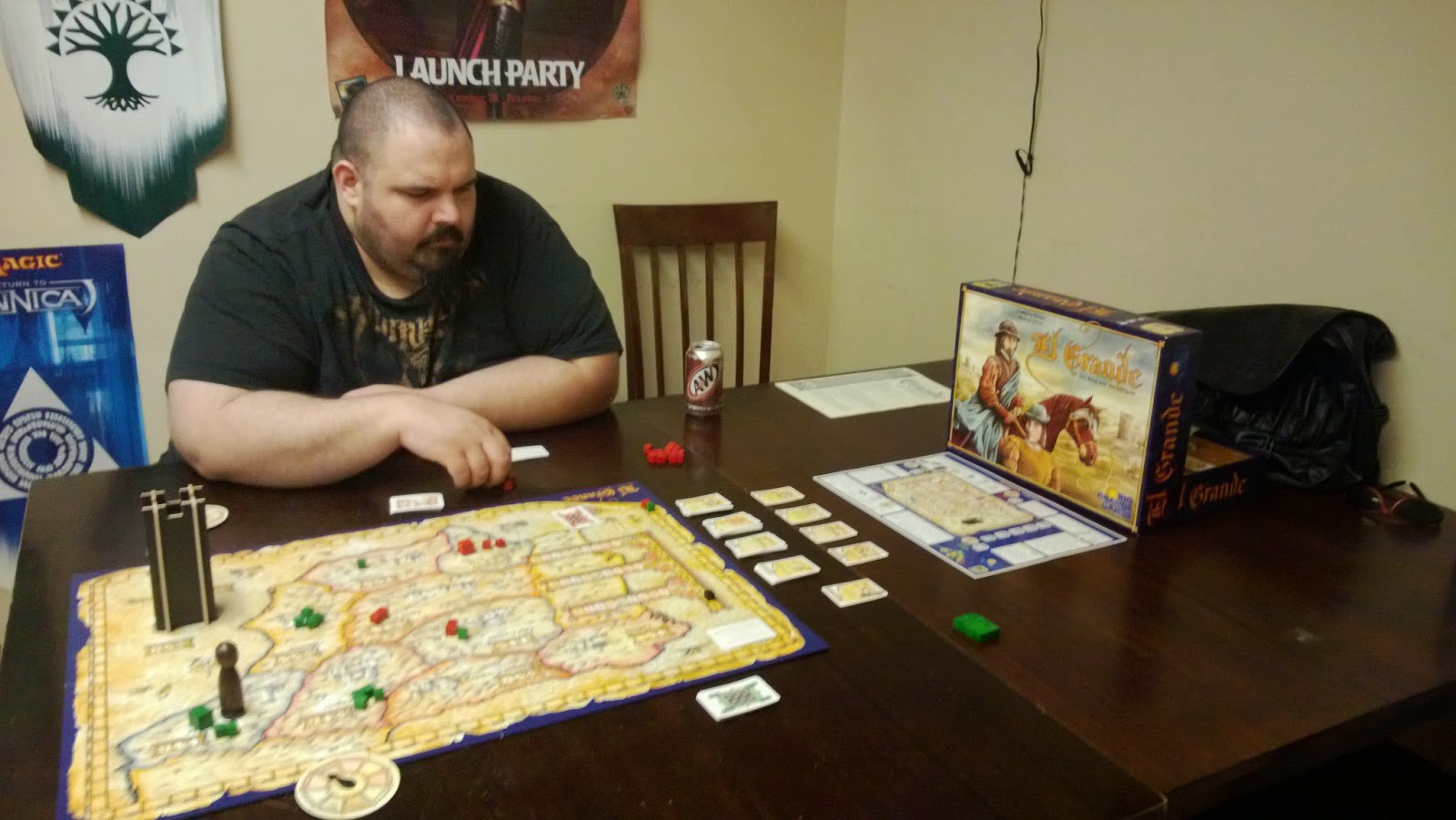 The components in this game are straightforward but elegant in their simplicity.  This was first produced in 1995 so it isn't as flashy as boardgames from the last decade or so, but with five colored sets of cubes (one in each set being larger to represent the "Grande"), five spinner-disc wheels for secret plotting, a solid and sizable wooden pawn for the king and a (practically indestructible and undeconstructable) four-piece tower for the "Castillo," it's still the map that is the highlight of this game's physical elements.  It's a good looking board with a Old World style map and stylized turn track that does the job admirably.  The game as described on Board Game Geek is as follows:


In this award-winning game, players take on the roles of Grandes in medieval Spain. The king's power is flagging, and these powerful lords are vying for control of the various regions. To that end, you draft caballeros (knights in the form of colored cubes) into your court and subsequently move them onto the board to help seize control of regions. After every third round, the regions are scored, and after the ninth round, the player with the most points is the winner.

In each of the nine rounds, you select one of your 13 power cards to determine turn order as well as the number of caballeros you get to move from the provinces (general supply) into your court (personal supply).

A turn then consists of selecting one of five action cards which allow variations to the rules and additional scoring opportunities in addition to determining how many caballeros to move from your court to one or more of the regions on the board (or into the castillo - a secretive tower). Normally, you may only place your caballeros into regions adjacent to the one containing the king pawn. The one hard and fast rule in El Grande is that nothing may move into or out of the king's region. One of the five action cards that is always available each round allows you to move the king to a new region. The other four action cards varying from round to round.

The goal is to have a caballero majority in as many regions (and the castillo) as possible during a scoring round. Following the scoring of the castillo, you place any cubes you had stashed there into the region you had secretly indicated on your region dial. Each region is then scored individually according to a table printed in that region. Two-point bonuses are awarded for having sole majority in the region containing your Grande (large cube) and in the region containing the king.

So, as you can tell, the game relies on responding well to the available action cards in direct opposition to the tactics chosen by your opponent(s).  Tactics are definitely the crux of this game.  You are managing a "worker" resource and looking to control territories but the cards and their availability are the key.  You can make long range plans and even devise a loose overall strategy but unless you live in the moment, you're likely to come out behind.  I'm definitely looking forward to playing this one again and again in the future.