In 1977, Simulations Publications, Inc. (SPI) came out with a War of the Ring (1977) wargame that simulated the action from The Lord of the Rings.  The Lord of the Rings (1978) film by Ralph Bakshi was due out the next year and the calendars with artwork by the Hildebrandt Brothers had been coming out annually since 1976.  The game could be played on two levels simultaneously, the warfare game encompassing the many potential battles of Middle-earth and a deeper level where the Fellowship attempts to get the ring of power to Mount Doom even as Sauron searches for it.  There was an additional way to play where a third player takes on the role and forces of Saruman but I don't recall playing it that way myself.  The game was no more complex than any other wargame of the era and if you liked the theme, LotR, then it was a blast.

In 2004, Fantasy Flight Games published the War of the Ring (2004) strategy board game by Roberto Di Meglio, Marco Maggi and Francesco Nepitello that, for source material reasons, cover much of the same ground.  That game was republished by Ares Games in 2012 as a second edition with updates, corrections, and well-received revamped components and elements.  It jumped from an already remarkably high 7.86 rating on Board Game Geek to an 8.38!  There have been a couple of expansions for the second edition game.  I have played the first edition of the game and loved it.  It is, however, one of those games that takes time to play and requires players with patience and a wargaming mentality. 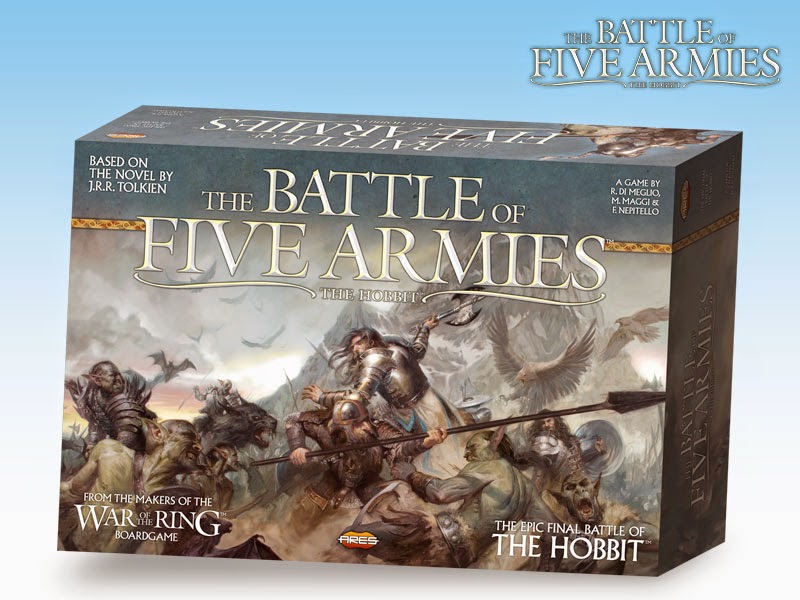 Now, Ares Games is following up their success by giving us a Gen Con release of The Battle of Five Armies (2014) utilizing the same mechanics as War of the Ring.  The description on Board Game Geek comes from the publisher as follows:


The Battle of Five Armies – based on the climax of JRR Tolkien's novel The Hobbit – pits the hosts of the Elvenking, the Dwarves of Dain Ironfoot, and the Men of the Lake led by Bard the Bowman against a horde of Wolves, Goblins and Bats led by Bolg, son of Azog. Will Gandalf turn the tide for the Free Peoples? Will the Eagles arrive, or Beorn come to the rescue? Or will Bilbo the Hobbit perish in a last stand on Ravenhill?

The Battle of Five Armies features a game board representing the Eastern and Southern spurs of the Lonely Mountain and the valley they encircle, and a number of plastic figures representing troops, heroes and monsters.

The Battle of Five Armies is a standalone game based on the rules for War of the Ring, which is from the same designers, but with the rules modified to function on a tactical level as they describe a smaller battle rather than the entire war. Ares Games plans to expand the Battles game system in the future, releasing expansions depicting other battles from the Third Age of Middle-earth narrated in The Lord of the Rings, such as the Siege of Gondor and the assault of Saruman against Rohan.

I must admit that I am not only excited to see this release and play it but also amped up to want to get hold of the War of the Ring second edition and give that a try too.  I'll need to start checking locally to see who might be willing to play!