One of the games my buddy Tom got sent when his friend Mike was cleaning off some shelves was Lords of Vegas (2010).  It's a two to four player game from Mayfair Games with an available expansion that allows for a couple more players.  I viewed a video on TableTop earlier this year and wasn't immediately taken with the game but when Tom brings something to the table at Culver's, I've learned it is a good idea to give it a go.  I wasn't disappointed.  We played without the expansion and four of us learned the game and played in just a few hours. 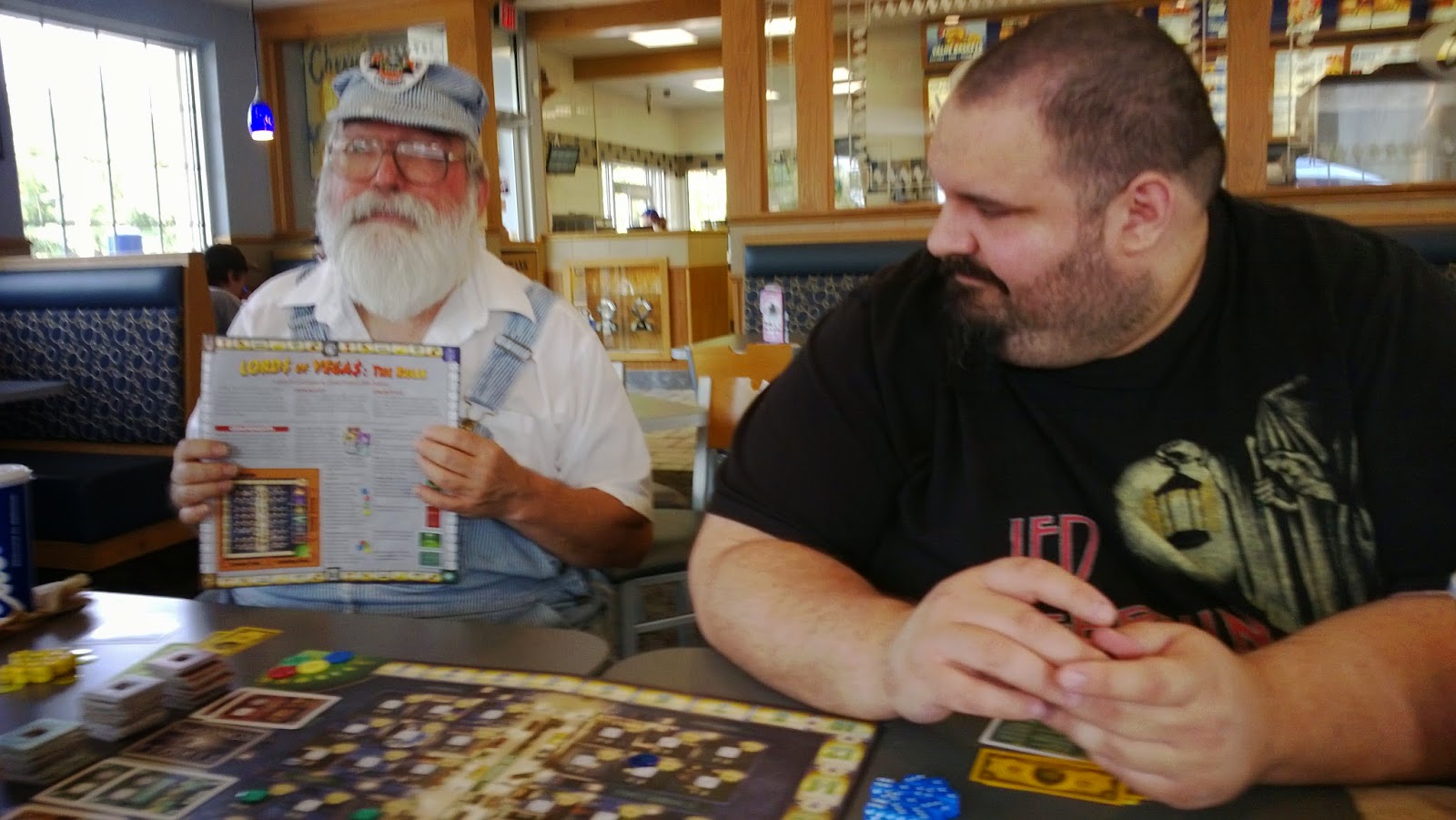 
You and your opponents represent powerful developers in a burgeoning Nevada city. You will earn money and prestige by building the biggest and most profitable casinos on "The Strip," the town's backbone of dust and sin. You start with nothing but parking lots and dreams, but from there you build, sprawl, reorganize and gamble your way to victory. Score the most points investing in the most profitable development companies and putting the best bosses in control of the richest casinos. Put your dollars on the line . . . it's time to roll!

The game board is broken into 8 different areas, each consisting of a number of empty 'lots'. Players build lots by paying money and placing a die of the value matching the one shown on the lot's space onto the lot, along with a casino tile of one of 7 colors. Adjoining lots of the same color are considered a single casino. The casino's boss is the player whose die value is higher than any other in the casino. On each players turn, players turn over a new card representing a new lot they get. The card also is one of the casino colors. Any built casinos of the matching color will score both money and VP. Money is earned for each lot in the casino, where each lot may be owned by a different player. VP goes only to the casino's owner. Players can expand their casinos; try to take over casinos owned by other players; make deals to trade lots, casinos and money; or gamble in opponents' casinos to make more money. Ultimately, though, only victory points matter, and that means making yourself boss of the biggest casinos.

It's meant to play in about an hour but since it was the first time through for all four of us, I'm not surprised at the time it took.  As with most games that have a victory point track, it behooves players to move along that as quickly as possible.  You can't move backwards on it, so extending yourself isn't a bad idea.  It's also possible to go to the casinos of other players and gamble there, alleviating them of some of their money on hand, so spending what you have can reduce the chance that someone will put the squeeze on you and drain your nest egg.

Watch out also for casino colors that are drying up.  If you bank too much on one color or another and fail to get some three and four lot locations early in alternate colors, you can wind up stagnating on the victory track.  Then you'll have to spend a great deal of money on the roll of dice to gain control over someone else's casino, and if they have more dice in there, the odds are against you becoming the boss.  I pushed early to build a six lot casino and it allowed me to jump several places up the track each of several turns.  This doesn't ensure a runaway but it does give a great advantage.  The downside is that it makes other players wary of making deals or trades with you, so don't count on those down the line if you have a substantial lead.

I'm looking forward to a game while using the expansion called "Up!" which allows for up to six players and expands building possibilities into upper floors for casinos.  There are other expansion but this is the one Tom has and it seems like a good addition.  I hope we play again soon while the rules and strategies are still swirling around in my head.