The Sunday Miscellanea - Sheriff of Nottingham (2014)

It's been a little while since I last played Sheriff of Nottingham (2014) but it is just as fun as I remembered.  We had to refresh ourselves on a few of the rules, but one of the players was new to the game, so that worked out just fine.  The sequence of how things happen in a turn are very important to a game where bluffing and bribes are also important.  Mistakes were made and pressure was brought to bear, so in the end it was all about the contraband. 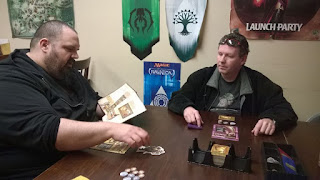 
Prince John is coming to Nottingham! Players, in the role of merchants, see this as an opportunity to make quick profits by selling goods in the bustling city during the Prince's visit. However, players must first get their goods through the city gate, which is under the watch of the Sheriff of Nottingham. Should you play it safe with legal goods and make a profit, or risk it all by sneaking in illicit goods? Be mindful, though, as the Sheriff always has his eyes out for liars and tricksters and if he catches one, he very well may confiscate those goods for himself!

In Sheriff of Nottingham, players will not only be able to experience Nottingham as a merchant of the city, but each turn one player will step into the shoes of the Sheriff himself. Players declare goods they wish to bring into the city, goods that are secretly stored in their burlap sack. The Sheriff must then determine who gets into the city with their goods, who gets inspected, and who may have their goods confiscated!

Do you have what it takes to be seen as an honest merchant? Will you make a deal with the Sheriff to let you in? Or will you persuade the Sheriff to target another player while you quietly slip by the gate? Declare your goods, negotiate deals, and be on the lookout for the Sheriff of Nottingham!

Sheriff of Nottingham is the first game in the Dice Tower Essentials Line from Arcane Wonders. 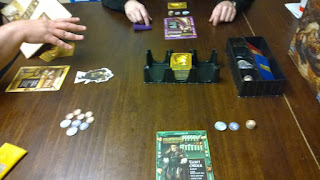 I gave total honesty a shot this time through, as long as that includes always saying honest things no matter what inflection I might be using.  I probably should have spread my bonus point acquisition around but I had to play the cards I was dealt.  I think contraband might be too import to the bottom line not to try and slip some through.  I'll make some adjustments next time and see. 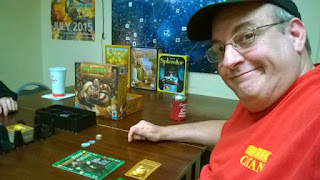