Splendor (2014) is a game I have seen played a number of times in the two years since it was released but that I hadn't played until recently, at the First Sunday gameday (Open Boardgaming at Lake Geneva Games on the First Sunday of every month) then teaching it to a couple of the weekly LGG gamers.  It's a straightforward game that is easy to teach and promote fast play. 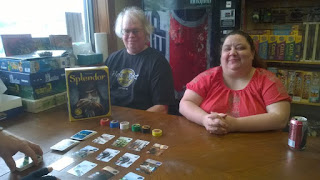 
Splendor is a game of chip-collecting and card development. Players are merchants of the Renaissance trying to buy gem mines, means of transportation, shops—all in order to acquire the most prestige points. If you're wealthy enough, you might even receive a visit from a noble at some point, which of course will further increase your prestige.

On your turn, you may (1) collect chips (gems), or (2) buy and build a card, or (3) reserve one card. If you collect chips, you take either three different kinds of chips or two chips of the same kind. If you buy a card, you pay its price in chips and add it to your playing area. To reserve a card—in order to make sure you get it, or, why not, your opponents don't get it—you place it in front of you face down for later building; this costs you a round, but you also get gold in the form of a joker chip, which you can use as any gem. 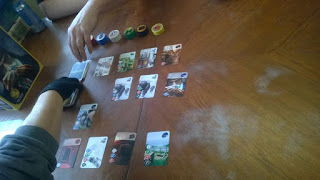 With a handful of games under my belt, I think this is a game that makes for a good introduction into niche gaming.  I'm not sure it has the sustained replayability of some other entry-level games like Catan and Ticket to Ride, but it might seem less intimidating then even those.  It can be carried in a much smaller case than the box in which it comes, making it highly transportable, like Love Letter.  Still, I am on the fence about suggesting everyone own a copy.  I need to play it more to be sure but I am leaning in that direction. 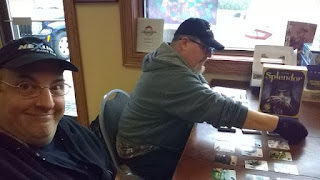