The success of Monopoly bred many games that tried to either capture the same feel or play against it.  Squander (1965) was a game that celebrated losing money instead of making and hoarding it.  My buddy Tom has a game that plays to the opposite extreme called Greedy Billionaires, so he really got a kick out of this one back in the day.  I was pleased to find a copy and pick it up for him. 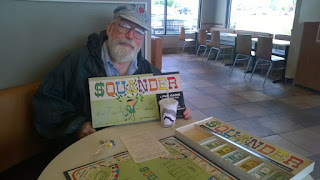 
Squander -- the game that allows you to live like a millionaire! Start with a million Squanderbucks. Buy hotels, gold mines -- be a tycoon on the stock market -- take impossible chances at Roulette, Monte Carlo, "21" and at the Horse Races. Spend as recklessly as you wish. The first player to Squander his million wins the game!"

Technically the game is titled "$QUANDER", as a dollar sign is used in place of the "S" in the title on the box cover and in the rules. 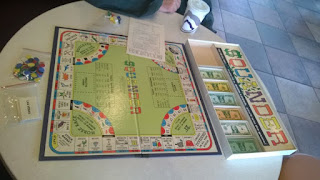 Of course, the fatal flaw of this game is roll-and-move.  Still, there are some fun things about it like the place names which are generally puns, but I enjoy that sort of humor sometimes.  ("Sometimes?" I hear my friends cry!)  The corner tracks and sidetracks does give the game some interesting turns, so to speak.  ("There he goes!")  If you see this one at a thrift store, snag it just for fun. 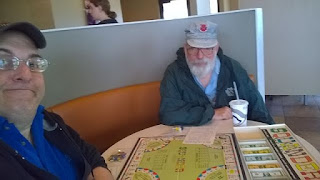